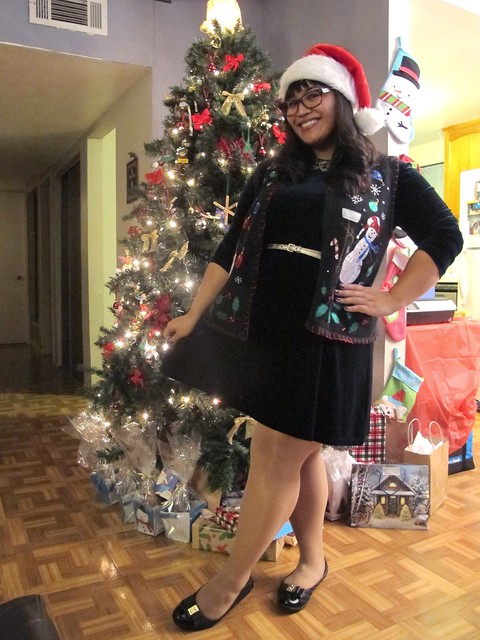 It’s already 2015 in some other parts of the world. How weird is that? I’m still hanging out in 2014 as I’m in California, and since I finally found my SD card with the one lone outfit picture I took on Christmas Eve, I figured I might as well have my last blog post of 2014 be an outfit one. Also, Christmas decorations are still everywhere so why can’t I do a Christmas related post six days after Christmas? Plus, my Christmas Eve outfit was SO AWESOMELY TACKY.

I found the velvet dress for $5 at a thrift store a couple years ago and it simultaneously screams Christmas and ’90s, don’tcha think? I would’ve died to have this dress in fourth grade, which is when my velvet obsession started. Hey, don’t judge me. I am a child of the 90s afterall. Velvet is coming back with a vengence anyway.

And earlier this year, probably in March, my mom and I went to the American Cancer Society thrift store and happened upon tons of tacky Christmas sweaters and vests! Jackpot, riiiight?! I think my mom bought all of them and sold a few. I was going to just wear the velvet dress with a gold Peter Pan collar, but then I thought I should just go all out tacky because why the eff not? I love kitschy things!

Despite the fact that it was ridiculously hard for me to get into the Christmas spirit this year, I had a great time this year compared to last. Christmas Eve was spent at my cousin’s house and we all kept taking selfies with our grandma like she was Santa Claus. And there were a couple rounds of white elephant and I ended up with a floral teacup and a clear mug with marshmallows, hot chocolate mix, candy, and a gift card to Yogurtland <– my favorite land right after Disney. 😀

Wherever you are, I hope you have a splendiforous time saying goodbye to 2014! And if you already celebrated the New Year, I hope you had a splendiforous time doing so. 🙂 I’ll be spending my New Year’s Eve packing for a little family excursion to SoCal. We’re leaving bright and early in the morning. Of course I’m put off packing at the last minute.

Vanessa of Nessbow asked myself and a few other bloggers if we’d be interested in doing a blog collaboration by putting together outfits based on our favourite fairy tales. I was excited about the idea, but overwhelmed by what character I could possibly seek inspiration from. TOO. MANY. CHOICES!

While browsing through Ross last week, I came upon this white lace dress with a pleated black bow belt and immediately thought that it would be perfect to base an Alice in Wonderland ensemble around it! But I need to be honest: I’ve never actually read either Alice’s Adventures in Wonderland or Through the Looking Glass. AH! I have a copy with both books in it, but every time I attempt to read it I just immediately flip to “Jabberywocky” because that poem is my jam. I know that poem by heart! ❤ And of course I’ve seen and love the animated Disney film.

Anyhow, I found this blue Lily Pulitzer cardigan with crystal buttons for $3.25 the week before at Goodwill! If that’s not a thrift score, then I don’t know what is. I think my outfit would’ve looked better with my black ballet flats, but I’m pretty sure my house ate them because they’ve been M.I.A. for at least a good month. *sigh*

My LeSportsac x Fafi bag is something I’ve had for years. I remember being so excited when I found out about their collaboration! The design Fafi created has a Wonderland feel to it so I felt that it would go perfectly well with my outfit 🙂

PS: Here’s a video of The Muppets performing “Jabberywocky” 😀