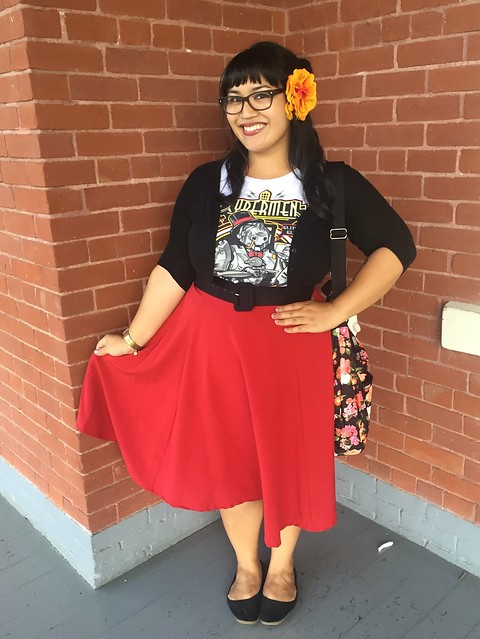 I don’t believe in washing my lighter clothes separately from my darker clothes. I ain’t got time for that! Throwing everything into the wash and putting it on cold has never ever been a problem for me. Why the hell am I talking about this? It’s all relevant to the outfit I’m wearing in this post, I swear! Now, you see that white t-shirt I’m wearing with an uber fancy pants Cyberman on it? Well, it is no longer white. It is pink because I accidentally didn’t switch the wash from warm/cold water to cold/cold water. UUUUGGGGHHHH!!! Such a rookie mistake! Wanna know what turned it pink too? If you guessed the skirt I’m wearing in these picture, you’d be correct. /facepalm

In a way it’s kind of funny since –SPOILER ALERT– Danny Pink from series 8 of Doctor Who turns into a Cyberman… and my shirt’s got a Cyberman and now it’s suddenly pink. Get it? Get it??? Haaaa… okay, I’m the only one who finds it amusing. 😛

It’s not drastically pink. I don’ think so, anyway. But another casualty that the red skirt hit was my mint green cropped cardigan. RUGH. – insert angry face emoji here –

Lesson learned? Always triple check the water temperature before I wash my clothes! 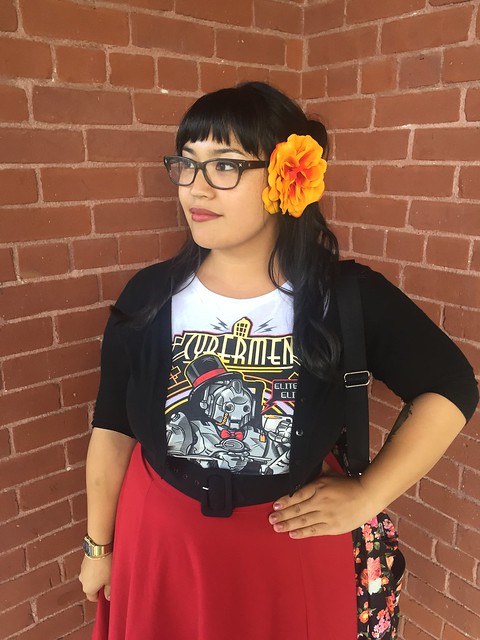 I’m still trying to get back into the swing of things since coming back home from San Diego yesterday. Even though I only went to Comic-Con for one day I’m completely zonked out by it! I went on Sunday and I remember Sunday being the day that no one really cared to go to because nothing super exciting usually happened panel-wise, but friggin Doctor Who, Breaking Bad, and Supernatural were all at the infamous Hall H (it’s damn near impossible to get into a Hall H panel unless you plan on camping overnight), and that’s a pretty exciting line-up for a Sunday. I decided to ditch Doctor Who — as much as I love the show, I wanted to get the most out of my one day at Comic-Con by exploring the floor to see what was going on rather than spend it waiting in line.

I’ll talk more about my con experience throughout the week! I just wanted to post this cute outfit I wore to the the Neil Gaiman book signing earlier this month. I actually planned this outfit out right after Tim bought the tickets months ago. Is that weird? I can’t be the only person who put together outfits months in advance to wear to special events that aren’t weddings! Anyhow, I really dig the design on my shirt. It was designed by The Atomic Rocket and features a dapper Cyberman rocking a bowler hat, monocle, and a bow tie. There’s a little word bubble by him that says, “Elite! Elite!” (a play on their “Delete! Delete!” catchphrase). It was on Teefury awhile ago, which means that it was only offered for 24 hours, so I immediately bought it! I love the Cybermen, they’re definitely one of my favorite monsters on Doctor Who. I feel like they don’t get as much love as the Daleks do. And Neil Gaiman wrote an episode featuring Cybermen in the latest season of Doctor Who, so it was super appropriate for the signing! 😀

Until next time, kitties!

I can’t help but feel like a bit of a phony when I wear my Gryffindor cardigan since I was sorted into Hufflepuff  on Pottermore (whut whuuut!), but in my defense my sister bought the patch for me when she went to Comic Con for the first time (that was 10 years ago!), and then I sewed it onto my cardigan so I could dress up like a Hogwarts schoolgirl for the last Harry Potter movie (see here) — all that happened waaay before Pottermore! Besides, it totally goes with my hella awesome Hermione Granger shirt that I just bought from Teefury!!!

If the design looks familiar, it’s by Megan Lara who I featured in my Curator’s Corner series not too long ago. Oh, and her Luna Lovegood design is currently available on Teefury as well. Oh my glob, just take all monies, Megan (and Teefury)!

For the first installment of Curator’s Corner I’m featuring the beautifully geektastic art of Megan Lara! Like I mentioned in my last outfit post (Royal Peach), I talked about how I first came across Megan’s art a couple years ago when I saw her “Peach Nouveau” design on TeeFury. I love how many of her pieces are done in an art nouveau style that channels Alphonse Muncha with characters from geeky franchises such as Harry Potter, Doctor Who, classic Nintendo ladies, etc. But she’s no one trick pony — she does way more than geek nouveau! Megan’s work ranges from gorgeous and fancy, to sexy, and downright adorable (see “Troy & Abed’s Dope Adventures” below).

All photos courtesy of Megan Lara

There are SO MANY more pieces by Megan that I’d like to add on, but I think this ought to suffice!

Please be sure to check out and follow Megan on…

So y’know how on Monday I announced that I was going to start a new series on here called Curator’s Corner? Well, in today’s outfit post I’m giving you guys a sneak peek for the first artist that I’ll be featuring! The lovely art nouveau design of Princess Peach (from Super Mario Bros. fame) on my t-shirt is by the super awesome and über talented Megan Lara. I got it a couple of years ago on TeeFury and have been hooked on her work since then. She actually just had her art nouveau design of Hermione Granger entitled “The Brightest With of Her Age” up on TeeFury last night. I had to snatch that one as well since TeeFury only sells one t-shirt design a day — and once it’s gone, it’s gone.

I’ll be posting a bunch of links on where to find/buy her art and t-shirts tomorrow, so stayed tuned for that! 🙂

I’m not a huge gamer, but I did love my NES growing up.  And of course I loved Princess Peach (a.k.a. Princess Toadstool). It was only natural that I instantly fell in love with Megan’s “Peach Nouveau” design once I saw it on the interwebz — it’s fancy and geeky!

I’d gush about her work some more, but I’ll save that for tomorrow’s post.

Yesterday I hung out with my good pal Tim and was later joined by his lady Alise. Tim and I had been talking about how we hadn’t watched Scott Pilgrim vs. the World since January and kept talking about having a nerd-out day to watch it together, but we’ve both been B I Z Z A Y. I have such a nerd boner for Scott Pilgrim vs. The World — I watched it 3 times in the theater last year, and I bought the DVD the morning it came out. In fact, I walked to Target to buy it before I had class (I used to live within walking distance of a mall). He suggested making it a double feature with The Room — Entertainment Weekly hailed it as “the Citizen Kane of bad movies.” It’s so bad, it’s AWESOME. We ended up watching it twice. Ugh… so hilarious. It’s supposed to be a drama, but the acting is so horrible, the script is weak, and there’s tons of plot holes, BUT IT’S SO AMAZING.

Tommy Wisseau, who wrote, directed, and starred in it, said that it’s a black comedy, but you can totally tell it’s trying so hard to be a drama. It was also filmed with both a 35 mm camera and an HD one because he didn’t know the difference… /facepalm.

The Room also has some pretty fantastic dialog. Here are some of my favorite lines:

I highly recommend watching The Room! And also Scott Pilgrim vs. The World. <– greatest movie EVER. Okay maybe not ever, but close.