Hey my little ponies! Level Up’s been churning out some pretty sweet loot within the past few months! In the video above I go over the items from April (“Quest”), May (“Power”), and June’s (“Dystopia”) subscriptions. Make sure to check it out to see the fun stuff they’ve sent out. 🙂

For April’s subscription, I remember being super stoked about it because I had been hoping for something along the lines of their “Fantasy” themed Loot Crate box from last year. The “Fantasy” box came with items from Game of Thrones, The Princess Bride, Harry Potter, and Dungeons & Dragons, so I had visions of some sort of Harry Potter or Game of Thrones accessory/wearable stuck in my head. And in a promo email I got, it said stuff from Harry Potter and the Labyrinth would be included, but then I learned that that was for the Loot Crate box, not the Level Up subscription. – le sigh – But most of the fandoms included in the Level Up subscription were things I was a fan of like The Legend of Zelda, Goonies, and The Princess Bride. I was little thrown off that Star Trek was included as the lady loot item since January’s “Invasion” already had a Star Trek BFF necklace. I’m not completely immersed in the Trekkie ‘verse — I’ve only seen the newer movies with John Cho and Simon Pegg, and thoroughly enjoyed them. The Star Trek items they’ve come out with have been really cool, like the galaxy print leggings from “Quest,” but I’m hoping to see a bit more diversity within the next few subscriptions as far as fandoms go. It seems like Super Mario and Marvel  has made an appearance a few times too. Of course I don’t mind that since Mario was practically part of my childhood, and I’m a big fan of Marvel. Bleh. I’m just being biased. 😛

Other than the Star Trek overload, I really dig the stuff Level Up comes out with and I’m not just saying that ’cause they send it to me (see FTC disclosure below). Everything I’ve ever received has always been top quality. But I digress.

So, without further ado, here are some of the ways I styled items from the past few subscriptions:

Look #1: By the Floral of Greyskull 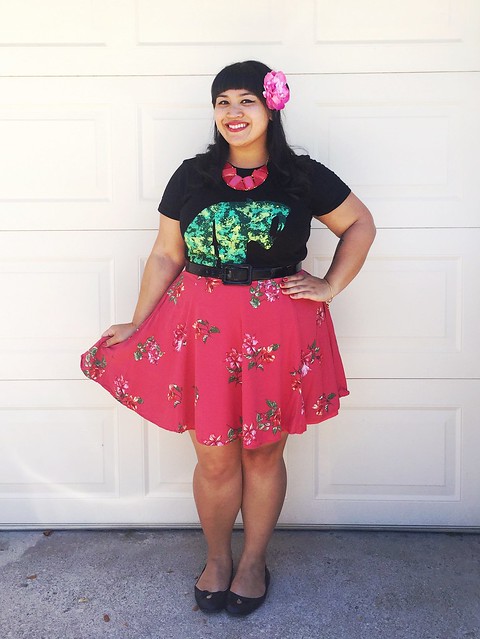 May’s “Power” t-shirt subscription came with a pretty rad He-Man t-shirt featuring his loyal pal Cringer (aka Battle Cat when He-Man zaps him with the Power of Greyskull) lookin’ fierce AF. He-Man’s silhouette is actually in the middle of Cringer, but you can’t see him in my outfit since I tucked the tee into my skirt. I really dig the design on this tee; the greens are so vibrant! I felt slightly weird about wearing it since I was more into She-Ra than He-Man as a kid, but when worn like this it seems inconspicuous enough. Green and pink is one of my favorite color combos, so I paired the tee with this cute floral skirt and pink statement necklace. 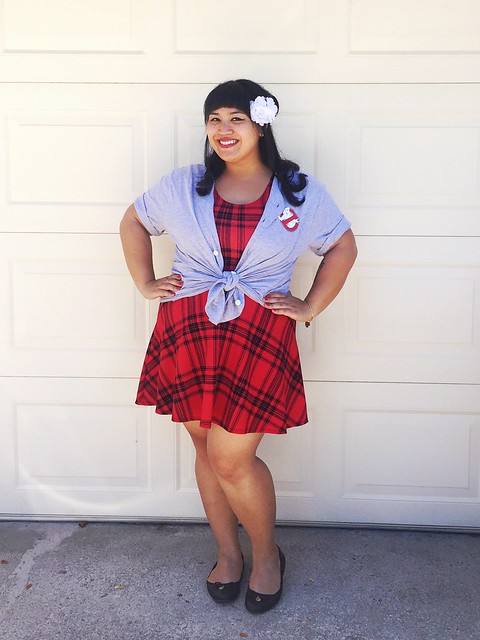 In my unpacking video review, I initially said that the wearable item from June’s “Dystopia” subscription looked a little too big since it’s a unisex XL. It fit me alright, but I looked a little boxy when I tried it on the way it’s supposed to be worn. In order to make it more feminine, I rolled the sleeves up a little and tied a knot in middle like I usually do with some of my cardigans. If I watch the new Ghostbusters movie, I know what I’m wearing to the theater! 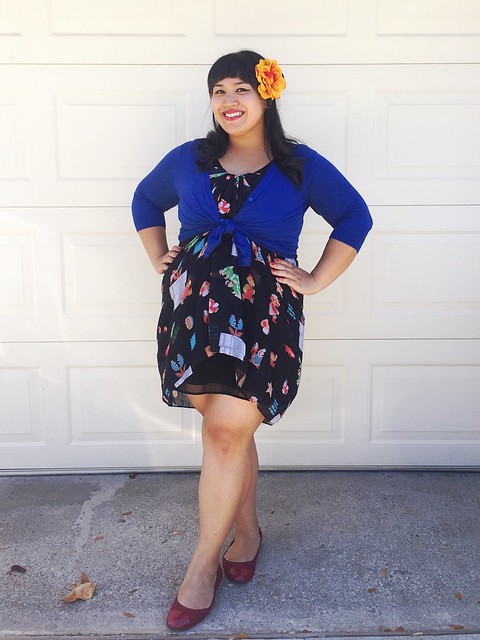 Okay, so I’m pretty damn proud of myself about this outfit because I turned the Super Mario infinity scarf (that I totally forgot to show in the video. D’oh!) that was part May’s Lady Loot subscription into a mo’fookin’ dress! Er… well kind of, anyway. I was super excited about Yogurtland’s Nintendo campaign, and really wanted to wear the scarf when I went a few days ago. But it’s summer and I live in the Central Valley of California and it’s stupid hot over here. BUT I WANTED TO WEAR THE SCARF. I wore a black dress as a base and attempted what felt like a bajillion different styles (probably only four though) until I came up with what you see in the picture above.

If you’re into geek fashion, I definitely think Level Up is worth checking out. Plus you can save 10% off your subscription by using the code LEFANCYGEEK during checkout. Wee! 🙂

FTC Disclosure: This is a sponsored post as Loot Crate/Level Up sent me items to review and will gain a little bit of compensation for those who purchase subscriptions through the links provided.

Last month’s Level Up subscription theme was “Versus” and you know what? I felt like it was me versus effing iMovie because it did NOT want to let me edit my damn unpacking video! I got so angry, I had to walk away and color in some pages of my Star Wars coloring book. I managed to prevail in the end though! So iMovie can go suck it 😛

Check out my video to see all the cool stuff it came with! I also go into further detail about Level Up in case you’re not familiar with it. If you’re reading this via email and not on my actual site, I noticed that my YouTube vids don’t show up, so you can watch it here.

I’ll be posting different ways I accessorized the items later this week! 🙂

Don’t forget: if you’d like to subscribe to Level Up, you can save 10% by using “LEFANCYGEEK” and please be sure to use this link when you subscribe 🙂

This month’s theme is “Quest” and will feature items from The Princess Bride, Goonies, Star Trek, Legend of Zelda, and Kingdom Hearts. So if you’re reading this before 9pm PST, there’s still time to get it!!! So hurry because today’s the last day!! AAAHHH!!!!