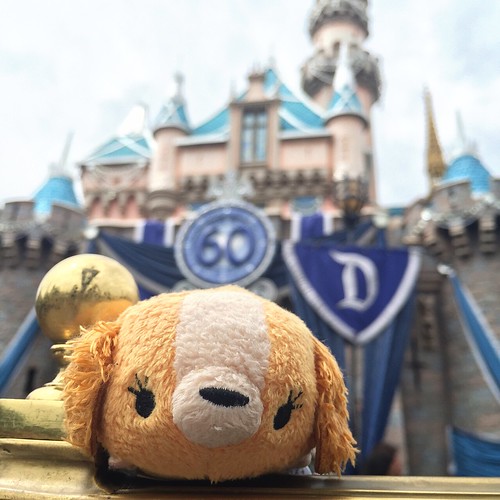 My trip to Disneyland last weekend literally left me speechless. No… seriously. I left with a baaaad case of laryngitis. Perhaps Ursula stole my voice while I was on the Little Mermaid ride at California Adventure — it stopped 5 times while I was on it. It only makes sense! <– no it doesn’t, I obviously caught something from someone.

I’m able to speak again despite the fact that my throat feels like a rabid kitten had been set lose and used it as a scratching post. That’s a step up from having a completely sore throat though, right? No? Yeah, you’re probably right. They’re both pretty terrible.

Anyway, I just wanted to leave a post to let y’all know I’m not dead! I’ll be back tomorrow with a post about experiencing my first 24 hour event at a Disney Park and how long I lasted. SPOILER ALERT: Totally didn’t last all 24 hours.

Until tomorrow, my little ponies! Hope you had a fantastic weekend. ♥ 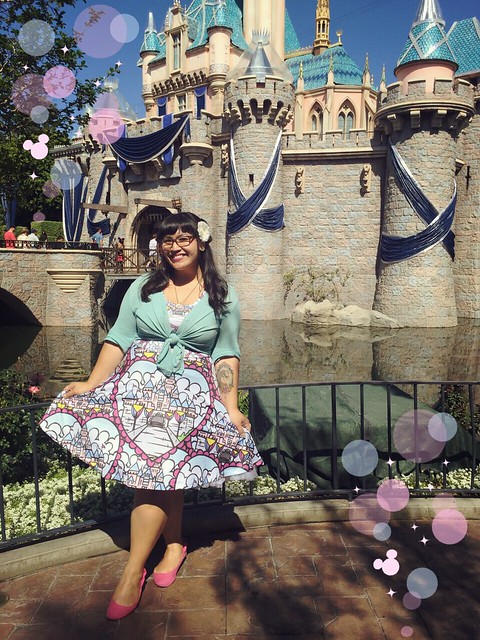 My week long break from work came to an end today. BLURGH. Spring Break, why did you have to go by so fast? Anywho, I hope you all had a happy Easter Sunday yesterday! And if you didn’t celebrate, I hope your Sunday was awesome anyway. 🙂

A couple weeks ago when I was in SoCal, I got to go to Disneyland to celebrate my sister’s birthday before heading to the Geek Week Fashion show. It was a pretty relaxing visit as we just went around the park doing the Disney Egg-Stravaganza Easter egg hunt, and we also took some pictures with popular Disney bunnies at the Spring Time Round-Up that was set up in Frontierland. I’m still bummed that I didn’t get to meet the White Rabbit and Thumper, because deep down I’m still 5, y’know. I think we managed to complete the egg hunt within 2 or 3 hours (we stopped for lunch, so probably 2 hours), and decided to head to California Adventure and do the egg hunt there! We probably could’ve gotten it done a lot faster if we didn’t spend 10 minutes looking for the Goofy egg that was hidden at the Astro Orbiter in Tomorrowland. For the record, he wasn’t hidden anywhere near the actual ride! What sneaks.

It was fun, and we got a couple of cute Disney eggs in the end — I got the White Rabbit and Thumper which were the ones I really wanted! — but if I didn’t have an Annual Pass, I don’t think I’d partake in it again just because it takes up a good chunk of time.

Oh, can I talk about my dress for a minute because LOOK AT HOW EPIC IT IS! It has Sleeping Beauty castle all over it and was designed by Save the Panduhs. I had been lusting after it like something fierce for a long time, but it wasn’t available anymore. But in February I saw that they were ordering a few more for one last go, and I ordered one on my phone in the middle of dinner during Galentine’s Day (I do not mess). Luckily it arrived a few days before I left for LA!

The dress is a compliment factory too. I don’t think I’ve ever been stopped so many times by people to let me know they really dug my outfit! 😀 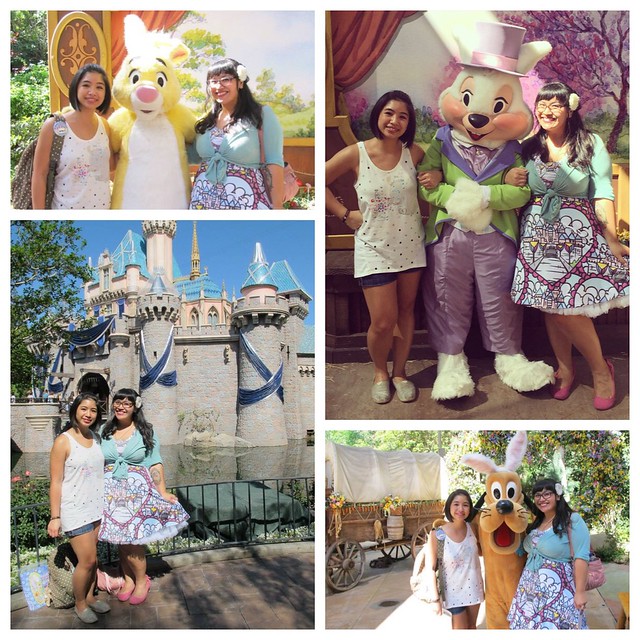 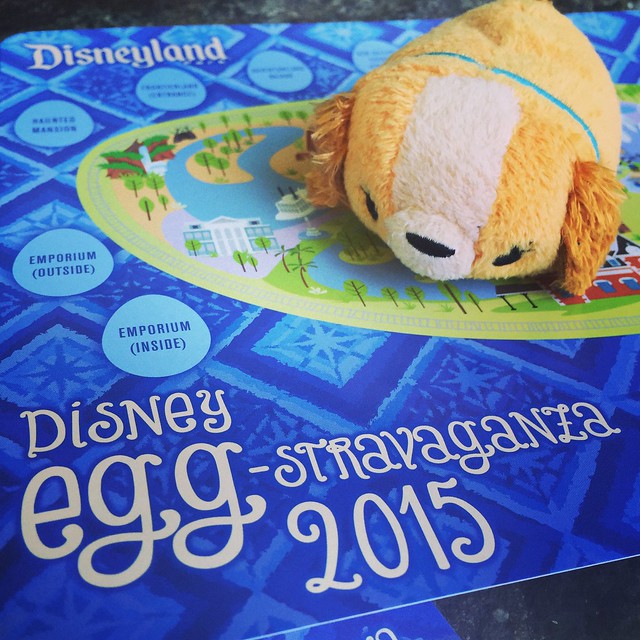 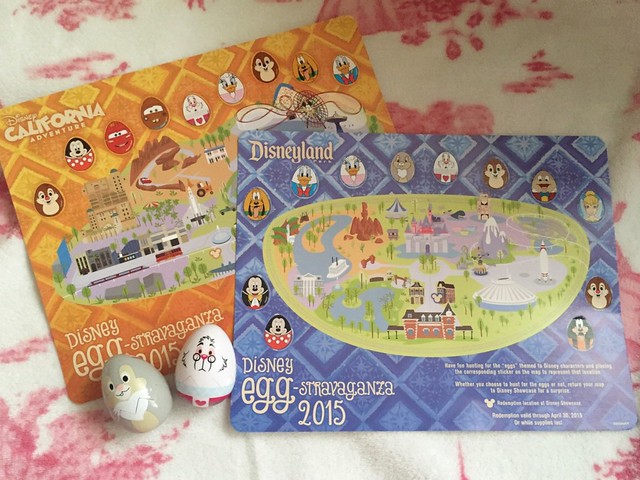 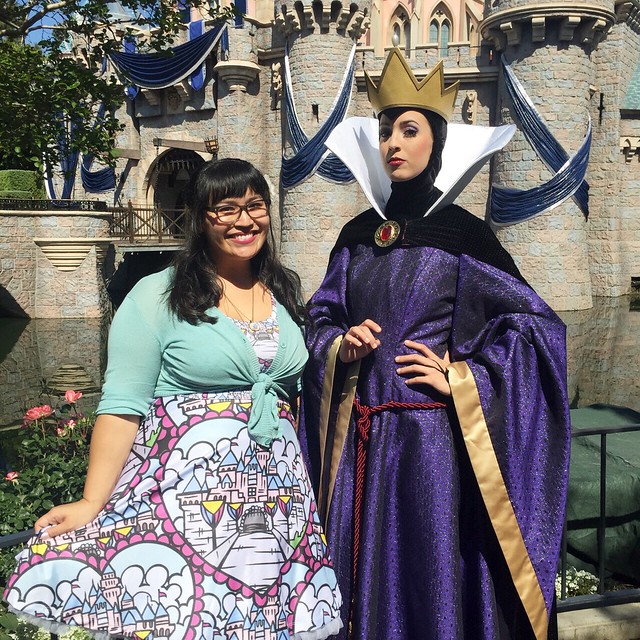 While taking pictures by the castle the Evil Queen walked by and said, “How about you take a picture of some real beauty?” and then she stood so my “good side” wasn’t facing the camera. It’s like she knew I’m not photogenic on my right side. What a wicked jerk! But I can’t wait to go back to Disneyland for their 24 hour event next month with my sister and her boyfriend!

In late April my sister randomly texted me asking if Tim and I would be able to make a last-minute trip to Disneyland on May 15, 16, 21, or 22. We were good to go on the 21st, but why those particular dates? In honor of Fantasmic!‘s 20th anniversary (I was 6 when it premiered… o,0), Disneyland held four special performances for Annual Passholders. AND I HAVE ONE, SO I COULD GO! <– it’s my first one, it’s rather exciting. Plus the 21st was mine and Tim’s 6-month anniversary, so I was all excited about that and the fact that we could get buttons. Except for some reason I was under the impression that it was 7 months, so that’s what we wrote on our buttons. My bad.

We left on Sunday afternoon and arrived at the park a little after 6 and met up with my sister, her boyfriend Ryan, my cousin Brian, and his girlfriend Jolene at Small World. What I forgot to take pictures of were all the goths roaming around the park (it was goth day!). It was kind of weird. Anyway, after Small World we headed to California Adventure since they have booze and pretzels filled with cream cheese! No wonder why the Karl Strauss beer station is Ryan’s favorite attraction at California Adventure. 🙂

For breakfast, we ate at Tangaroa Terrace at the Disneyland Hotel. The prices weren’t too shabby and we got to order our food on touchscreen menus — so Jetsons!

Cars Land has yet to open, but when you stand up by the benches at the Blue Sky Cellar you can get a really good view of it. Like most, I’m not the biggest Cars fan, but I’m really excited to explore this new area when it finally opens. It looks sick. And all the concept art and scale models of Radiator Springs looks SO AMAZING.

My sister and I waited in line to take a picture with Merida from Brave. We were the only adults there that weren’t accompanied by a child. Haha! The picture didn’t turn out well though, sooo I shall not be posting it here. At the end of the meet & greet you get to shoot a bow and arrow! I think I drew back to far, because the arrow bounced on the side and came back. The cast member said, “You’re trying to kill us all!” o,0

Tim and I took a long break before we headed back to the park. Since the Fantasmic! performance was a special event, the park closed at 1 am and New Orleans Square, Adventureland, and Frontierland were all open. There were also special food items on the menu at different restaurants, including a bacon/macaroni & cheese hot dog. Who comes up with this stuff? I was feeling a bit too sickly to eat the special foods, but I was able to enjoy popcorn shrimp and a dessert skewer the next day (though the food is special towards the performance, they start serving them at 4, so those who can’t go can still get a taste).

At the end of the night, some Disney characters lined up by the train station to say hello to guests. As Tim and I walked hung out around the hub in front of the castle and Main Street, the speakers boomed the Fantasmic! theme over and over and over. It was fun the first three times, but then I thought, “They must be doing this to drive us crazy and get us out of the park.”

I have soooo many more pictures to share! So keep a look out tomorrow for Darth Vader, little padawans, a techno looking rabbit hole, and much more. 🙂

I got back from my super amazingly fantastical 4-day Disneyland adventure last night around 2:30 am! Or technically, earlier this morning. My back is killing me (Tim had to put Icy Hot patches on me, and I’ve been downing Aleve like there’s no tomorrow), my feet are sore, and there’s slight chaffage between my thighs, but I already miss Disneyland oh-so-terribly. 😦 And despite the fact that we were there for 4 days, we still didn’t do everything we wanted to do. BUT, we also got annual passes, so we have a whole year to go back as many times as we can!!!

Some pretty interesting things happened during our stay — the cast of Modern Family were shooting on location for an upcoming episode. We spotted them on Main Street! And on Saturday, we used our Magic Morning passes to get into the park an hour early, and around 9:30 we headed over to California Adventure to get Fast Passes for World of Color, but we noticed that the park was damn near empty — a rarity for a Saturday at Disneyland. We were stopped by some cast members at the entrance/exit and they told us that there’s a “situation” going on outside of the park, so they weren’t letting anyone in OR out. Basically, we were trapped inside Disneyland which is the greatest place anyone could be trapped at. We got to enjoy 3 hours of short lines! But I do feel bad for the folks who had to wait inside the parking lot to get in.

Oh yeah, Disneyland closed at 2 am that night too. CRAZYNESS.