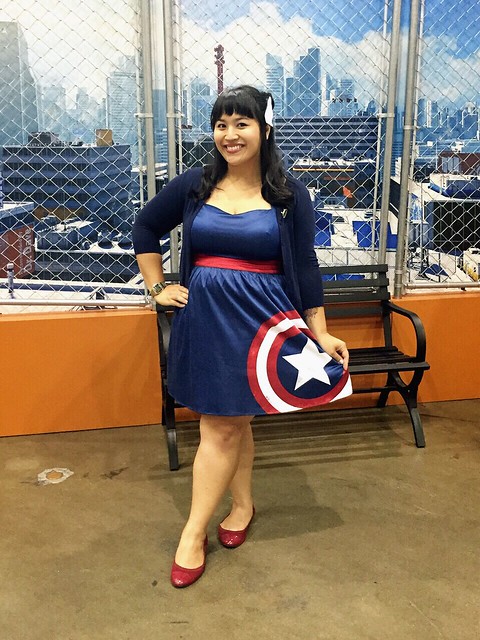 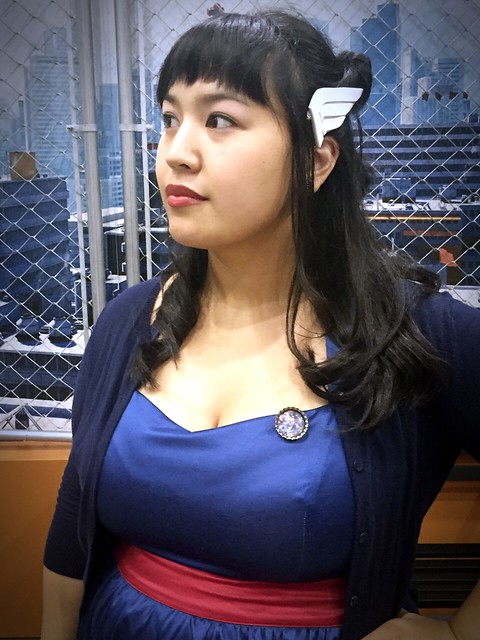 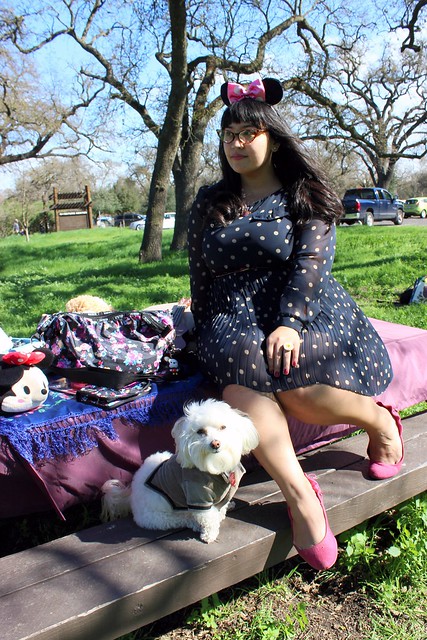 My love for Disney only intensifies as I get older and I always try to find ways to sneak elements of it into my everyday life, whether it be through household items (my Disney mug collection is getting out of control), beddings (stuffed animals count as pillows, right?), clothes, or accessories. What can I say? I’m a Disnerd for life!

LeSportsac released another line of Minnie Mouse bags and accessories last fall called “Minnie’s Floral Park.” I’m absolutely bonkers for anything with a floral print, so I’m utterly head over heels for this specific collection! LeSportsac makes their purses out of heavy duty, lightweight nylon, which is perfect because who likes throwing a bulky purse over their shoulder that’s already heavy without putting anything in it beforehand? Not this girl. This is why I love using LeSportsac bags for everyday use, and they’re particularly great for a long day at Disneyland!

I put together a Minnie Mouse “Disneybound” with the LeSportsac Minnie bag and my navy blue and beige polkadot dress, hot pink belt, and hot pink Blowfish flats. Usually when I see people Disneybound any character, I notice that they’re faithful to the original color palette that’s associated with the designated character whose style they’re trying to convey. I try to do the same, but other times I like to breakout and just draw inspiration with little details. For example, my friend Brianna made this cute little daisy ring for me (pictured below) and I thought it fit the vibe of my Minnie inspired outfit since she was originally drawn with a hat that had a daisy on top of it. I’m super anal-retentive when it comes to details. Some of you may have noticed from past outfit posts. Hehe. 🙂 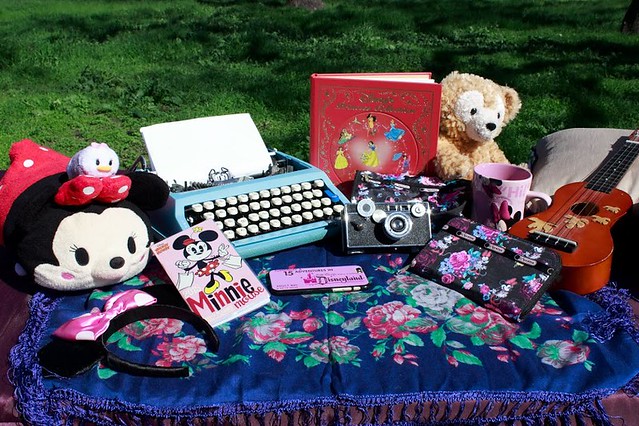 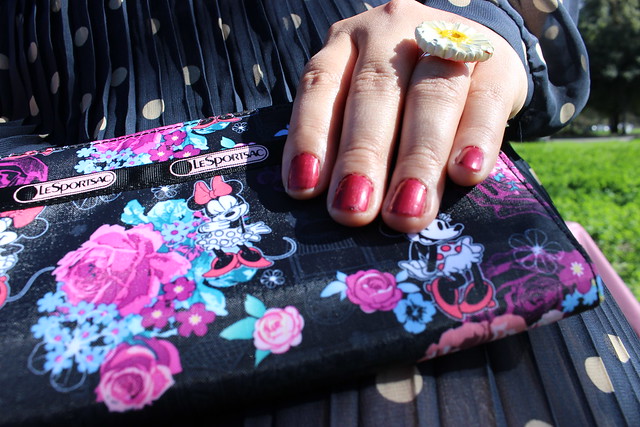 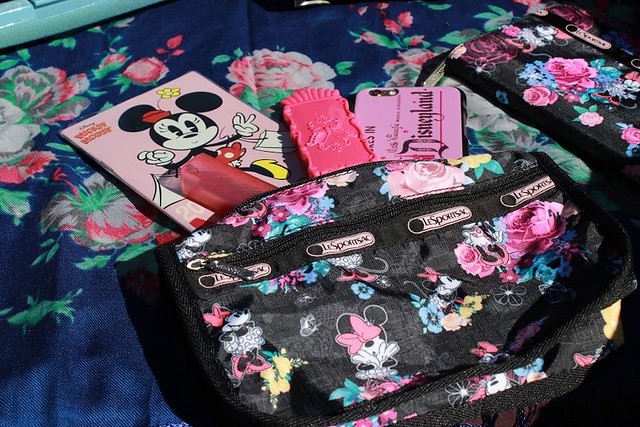 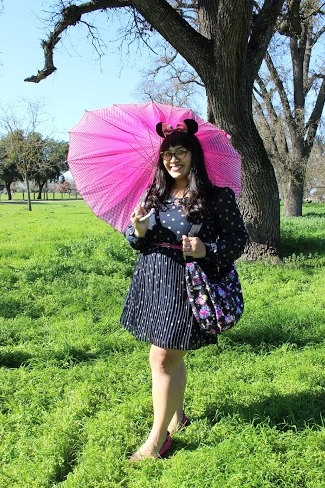 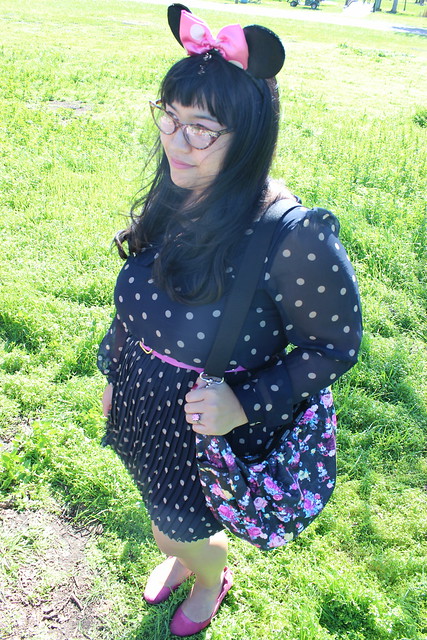 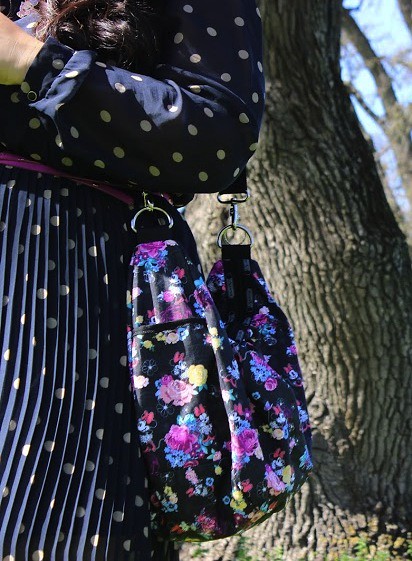 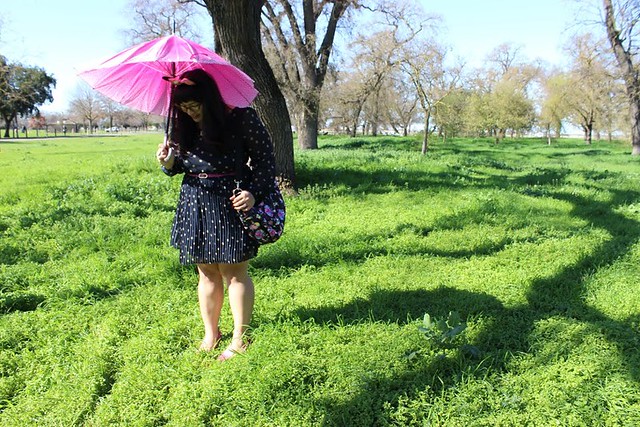 Are you a Disnerd for life too? Do you Disneybound? Let’s geek out about it in the comments section!

FTC Disclosure: This is a sponsored post as LeSportsac sent me these items to review. All opinions expressed of the products are honest and my own.

So, what have I been up to lately? Besides incessantly scrolling through indeed.com for job listings, I’m completely caught up with Sherlock despite the fact that it only premiered in the US last Sunday (huzzah for the interwebz! And ERMERGERD Benedict Cumberbatch ♡ Yowza). I’ve been in Sherlock mode for over a month — I re-watched series 1 & 2 after I scored both of them on DVD for under $19 thanks to the British TV sale Barnes & Noble had! But my attention is slightly shifting towards Downton Abbey since it just started here recently as well. I yelled at the TV (mainly at Mary and whatshisface) while watching the latest episode and I’m aching to know what’s going to happen next, but I’ve decided I’m not going to seek out the rest of the fourth series on the internet because if I do I will be immobile for hours and I won’t get anything done at all , and that’s obviously not kosher.

I’m starting to get back into reading for funsies and also to study the way other writers write since I’m stumped with my own writing (style, story structure, dialog, etc). Right now I’m in the middle of Vendela Vida’s novel And Now You Can Go. As I read it, it feels very invasive; as if I’m intruding on the narrator’s innermost thoughts. And I love it for that. I’ll do a little write up about the book once I’m done with it completely. If the author’s name sounds familiar, she co-wrote the screenplay for one of my favorite movies, Away We Go, with Dave Eggers.

A few days ago I dug through a box full of old school assignments and found a rough draft for one of the short stories I started working on during my last semester of school. There were also some pages of feedback from my fellow classmates. I drew inspiration from “Rabbit Fur Coat” by Jenny Lewis & the Watson Twins — the story is about a daughter’s lack of a relationship with her dysfunctional mother who is utterly obsessed with her rabbit fur coat. Reading it for the first time in years, I thought, “Hey, this isn’t bad. This is actually decent.” And then I wonder why I ever stopped writing at all. I started coming up with ideas for a third draft and took notes while I was at work the other day (it’s okay, I was just helping proctor exams!). 🙂

The outfit pictures in this post were taken a few weeks ago before my birthday in downton Livermore. Caitlin and I drove down to visit our fellow nerd and Creative Writing homie Amanda where we feasted on Italian food (my pasta kept me full well into the night, which irritated me because I wanted to eat a burrito), checked out a comic book store, and talked about our lack of writing since graduating and being unable to find jobs to help us evolve into fully functioning adults. We also discussed how there’s a lack of literature containing stories about 20-something characters that find themselves in the same situation we’re in — educated, living at home, struggling with adulthood. All coming of age stories are found in the teen-fiction section. Where are the ones for adults? We talked about how we need to change this. We also talked about Tom Hiddleston and Benedict Cumberbatch a lot (for obvious reasons).

I think I may have worn this outfit a million times already, it’s basically one of my go-to’s for work and my Sherlock necklace looks quite dandy against the floral print of the dress. And check out my shoes! I scored these saddle shoes at the Bass outlet in Vacaville a couple months ago for $50. Every time I go there I always hope to find a pair, but they never ever have any in stock. So that made it a justifiable purchase, right? Right. Of course it did.

In case any of you are wondering how I’m doing with that New Years resolution where I don’t buy any new clothing items unless they’re under $7: I’m doing surprisingly well. The only thing is I’m finding myself buying more DVDs and books so I’m thinking I have to add those things in the resolution mix as well. *le sigh*