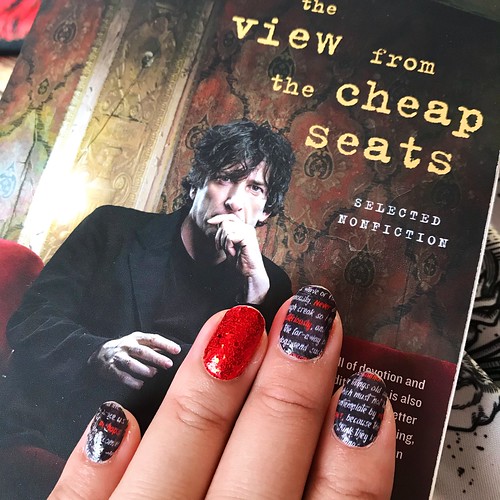 I soleomly swear by Espionage Cosmetics’ nail wraps when it comes to making my nails look fancy. Ever since I started wearing nail wraps, I can’t go back to nail polish. I mean, I have a few times, but nail wraps are sooo much more fun and last longer.

I’m especially very fond of Espionage Cosmetics’ literary inspired nail wraps, and was super delighted when I saw that they have an “Ultimate Bibliophile” bundle! It comes with 6 literary inspired wraps including Pride & Prejudice, Sherlock, Frankenstein, Dracula, War of the Worlds, and a new variation of their Literary wraps with gold accents! These manicures last for up to two weeks, but if you apply a top coat every now and then they can last a bit longer. Whenever I remove them, I always used nail polish remover to get rid of any sticky residue left behind, but I recently found out you can use coconut oil! I highly recommend going with that route because it also moisturizes your fingers too 🙂

The Frankenstein and Dracula ones were perfect for the month of October, and I got so many compliments on them! And did I mention the Frankenstein ones glow in the dark? Because they do! 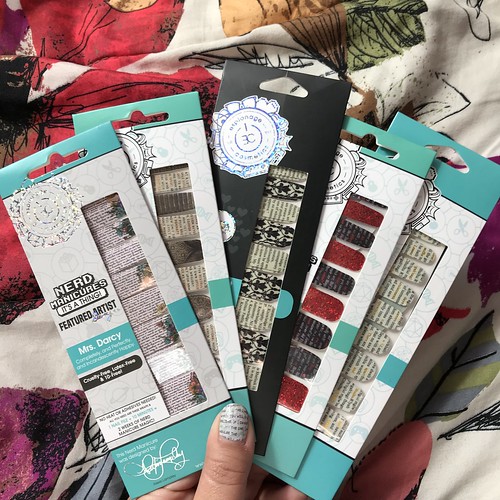 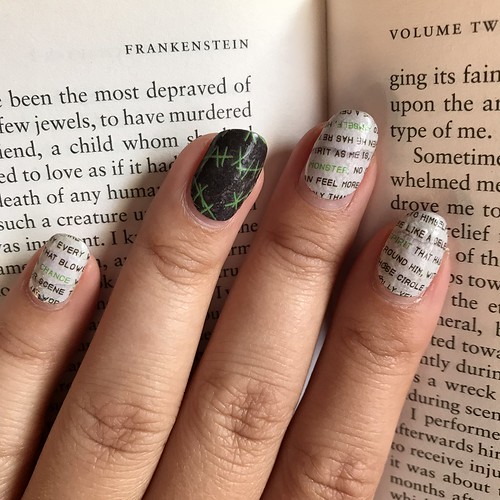 Are you a book worm too, or know someone that is? Then this bundle is perfect for both of you! Get the set here.

FTC Disclosure: This is a sponsored post as Espionage Cosmetics gave me store credit to purchase items to review, and will gain a little bit of compensation for those who purchase items through the links provided. All opinions stated are honest and my own. 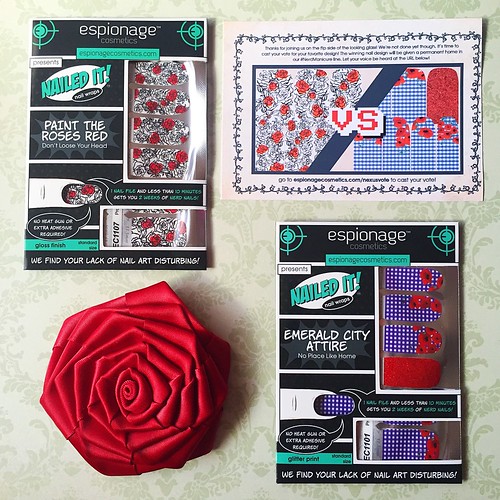 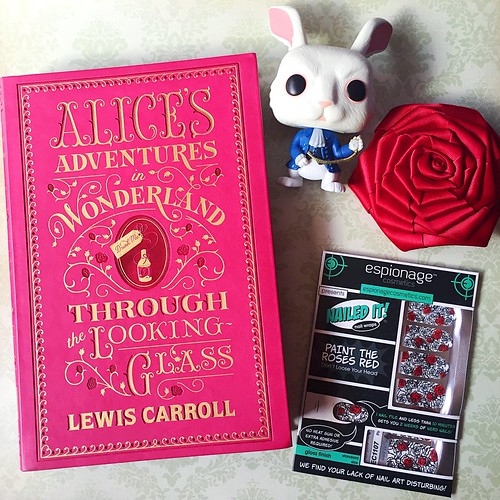 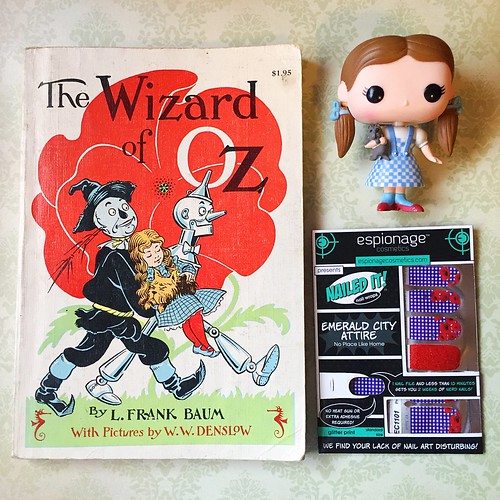 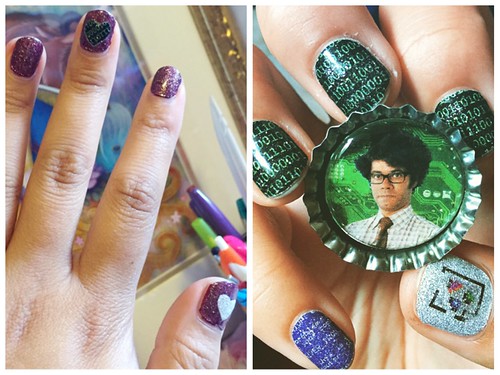 On Friday I went to San Francisco with Jen and Shanice since I didn’t have to work in the morning. Yay four-day weekend (for me anyway)!!! While Jen went to school, Shanice and I window-shopped around the downtown area and I picked up a Glinda wand at the Disney Store! But all the walking around we did left us ridiculously tired and the burgers we ate for lunch didn’t pack much energy. And I spent effing $3.50 on orange juice because I was too tired and thirsty to find Jamba Juice (gift card yo!), but it just so happened to be right next to Jen’s school. *grumble* By the time we met up with Jen to take pictures in the studio I was feeling pretty loopy from being malnourished and dehydrated. I lept, danced, spun in the spinny chairs, and made stupid faces during and in between test shots. Lots of silliness occurred (see picture below).

I posed for a few photos for Jen’s digital photography class and did some for funsies. I found a beautiful typewriter on the props table and had to incorporate it into my shoot since it went perfectly with my The Sun Also Rises shirt from Out of Print Clothing! This might look familiar to you as it was on my Christmas Wish List post in December. Tim ended up getting it for me for Christmas 😀 I added a glitzy Peter Pan collar necklace to it that I found at TJMaxx last month. Fancy, yah? Ernest Hemingway probably wouldn’t be impressed, but that’s okay. Me likes it! I read The Sun Also Rises for a Modern American Novel class during my first semester as SFSU. It was the only book I thoroughly enjoyed from that course, which is kind of sad considering that we read five books. Well, I find it sad anyway.

You know what else is sad? I sent my camera off to Best Buy to get it checked out — it’s unfixable and the camera I had is no longer sold/available so now I have to go and look for another one! They gave me a list of cameras that are “comparable” to mine, but they were all regular point and shoots whereas mine was a DSLR. I don’t want to do camera homework! I just know that I’m looking to get another Canon. I’m kinda iffy of the G15, which is basically the upgraded version of my camera, just because it doesn’t have a swivel screen and the screen it does have is exposed. I need the swivel screen. I just do, okay? Okay.

If you happen to be into cameras, I’d love to hear your recommendations!

The Raven by chezfancypants featuring  Out of Print Clothing

My Super Bowl Sunday was spent by shopping and watching Liberal Arts (which is basically like a super long episode of How I Met Your Mother) and The Rocky Horror Picture Show! Tim and I actually had a bit of a How I Met Your Mother/ Susan Sarandon movie weekend since we watched Jeff, Who Lives At Home which stars Jason Segel and co-stars Surandon as his mother, and then Liberal Arts was written and directed by Josh Radnor, and we followed that with Rocky Horror in which Sarandon plays Janet Weiss.

I am so thankful that Tim has no interest in American football. Dudes like that are so hard to find — they’re basically unicorns! Um… I just called my boyfriend a unicorn. o,0

Anyhow, since the team that won the Super Bowl is named after an Edgar Allan Poe poem I thought it would be fun to make an outfit based around Out of Print Clothing’s “The Raven” long-sleeved shirt. And BTW, they’re having a little sale in honor of their 3rd anniversary and for being able to send 440,000 books to various literary causes (yay reading!!!). So until Feb. 7 you can take 20% off your purchase with the code BOOKSFORALL. Now I can finally get that The Great Gatsby pullover I’ve been drooling over for years (that thing has been on every wish list and I still have yet to get it)! 😀

Here are a few versions of “The Raven” recited by Vincent Price and James Earl Jones (he did the narration on The Simpsons one too):

Hope your Monday’s not too dreary (especially if you’re a Niners fan).