I know I put up a Valentine’s Day themed outfit post last week, but I really like what I wore on the day itself, so I thought I’d share it on the blog too! The t-shirt I wore is from TeePublic and features a Star Wars x Disney mashup by James Hance of Penny from The Rescuers as Princess Leia. He’s one of my favorite geek artists of all time and he just seems like a really swell guy. This judgement solely comes from following him on Twitter and Facebook. I urge you to check out his artwork! Not only does he do great geek mashups, but creates some mind blowing portraits of fictional faves; he recently did a beautiful portrait of Princess Leia with flowers that I’m in love with. The header on his website is “Relentlessly Cheerful Art,” and if his work doesn’t put a smile on your face, something is legit wrong with you! 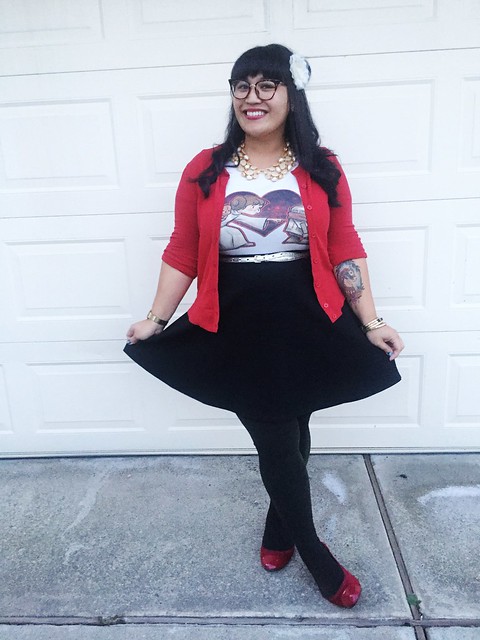 Like I mentioned in my Valentine’s Day post, I didn’t have any plans. But throughout the day I felt pretty zen… and then super sick because all I ate was chocolate covered strawberries, marshmallows, Girl Scout cookies, and cupcakes. That aside, I didn’t even cringe when I looked at that Facebook feature “On This Day” where it shows you all the things you ever posted on a particular day on Facebook. A photo album full of pictures from my first Valentine’s Day with my ex popped up, but rather than roll my eyes and wistfully look at the pics, I just kept scrolling to see what else I posted. And then I came across this gem:

“Okay, look. I had to ask myself a really hard question. Who do I love most? And the answer was so obvious. It was staring me in the face the whole time. The person I love most is me. I love me most. Look, if I could run across the beach into my own arms, I would.” – Jackie Burkhart

I posted that quote from That 70’s Show on Valentine’s Day 2011. I think I relate to it more now than I did then. In 2011, I was 25 and so desperate to find the kind of love that was only seen in romantic comedies and Disney movies. At that time I was in an on again/off again “situationship” with a guy I pined over for so long — 3 years to be exact. For 3 years it was very “will we or won’t we?!” Or maybe it ended by that time? I don’t remember, and I deleted the guy’s “break up” email a long time ago, so I can’t look it up in GMAIL for reference. I’m sure I posted that quote to prove a point. Like, “Yeah, I don’t need a man. I HAVE ME!” when really I was an emo sack of shit that just wanted to be loved (goddammit)! Today, I can say I’ve experienced the kind of love I always dreamed of as a little girl, but it came and went in what feels like less than 12 parsecs. There are days where I feel completely jaded by how unlucky I’ve been with love, however I don’t put all my energy into dwelling on it like I did when I was in my early 20s. Now, I’m learning to love myself more despite my flaws (and holy shit, do I have many).  There’s a million things I haven’t done, and men can wait! I will choose myself over any dude… besides Rory, obviously. Because every princess needs a furry sidekick! And if I’m going to go along with this whole princess schtick,  I’m going to look up to Leia because she’s the OG self rescuing princess. If my Scruffy Looking Nerf Herder happens to come along one day, so be it. Until then, I’m not sitting by metaphorical wishing well hoping he’ll find me. 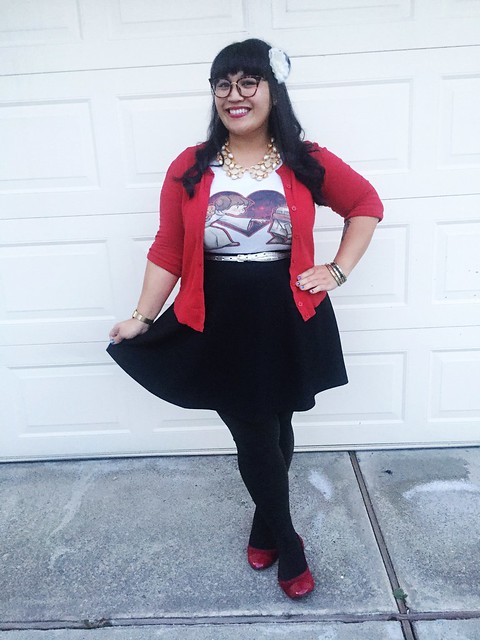 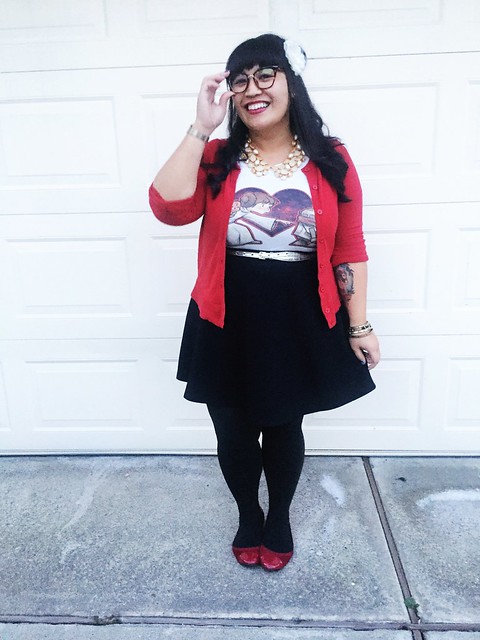 Maybe I should wear this shirt every Valentine’s Day. One can’t help but be relentlessly cheerful with such cute art on their person! How’d you spend your Valentine’s Day? Or are you like “meh, whatever” about it? Let’s talk about it in the comments!

On Tuesday, nerds around the world became up in arms over the George Lucas-selling-his-company-to-Disney-for-$4.05 billion debacle. My Tumblr and Facebook feeds were filled with posts along the lines of “WHY,GEORGE, WHY?” and “I can’t believe he did that” and there was a plethora of Disney/Star Wars mash-up art as well.

For those who are still sad/enraged by this merger, I urge you to CALM THE FUG DOWN.

Disney/Star Wars mash-up art (or just Disney/Stars Wars mash-ups in general) isn’t anything new — in fact, you can already see and buy that kind of stuff at Disneyland and Disney World considering the fact that there are both Star Wars and Indiana Jones attractions at either park. In Tomorrowland, you can buy popcorn inside an R2-D2 unit. Hell, there are even R2-D2 mouse ears and you can make your own light saber. Disney World holds Star Wars Weekend (which is totally unfair! What about Disneyland?!) and there’s also the Jedi Training Academy Show where little kids get to learn how to wield a light saber and face Darth Vader and Stormtroopers.

So when I first heard the news I thought, “Oh, that’s cool” because it just seemed like a natural thing given the facts I have previously mentioned.

And this video exists:

I didn’t hear about Episode 7 being put into the works until a bit later (because I didn’t bother clicking any links to read the full story), but when I  heard, I started thinking, “NO, DISNEY! DON’T MAKE PEOPLE HATE YOU.” My boyfriend calmed my nerves once he told me that George Lucas was only going to be a creative consultant, because if he’s not in full creative control, then they can always turn down anything he has to say. I told Shanice (my bestest friend who hasn’t seen episodes 1-3) about that and she said, “That’s a bad thing. That can hurt Star Wars!” To which I argued, “No, it’s a GOOD thing. George Lucas is the worst thing that has ever happened to Star Wars.” You know it’s true! . Just look at Jar Jar Binks.

Despite the fact that they’ve had more than a few flops (The Haunted Mansion with Eddie Murphy and the plethora of Air Bud movies), Disney are great story tellers. I have no doubt in my mind that they’re going to respect the Star Wars franchise and the people that will be working on Episode 7 are going to be folks who grew up with Han Solo and Chewie, so they definitely won’t bastardize the franchise. And weren’t many skeptical about Disney buying Marvel in 2010? Has anything gone wrong with that merger? No? Yeah, I thought not.

Lucas is also donating all the money he got from Disney to educational programs, which makes him better than a lot of people (looking at you, government). So you can’t hate him completely.

Hank Green of the Vlogbrothers pointed out something pretty interesting in his last video — Lucas has an effects studio called Industrial Light & Magic and in the 80s a computer graphics department was made and then sold to Steve Jobs for $5 million. That computer graphics department was Pixar and Disney bought them for $7 billion in 2006. Pretty sweet deal, right? I’d say the only bad thing to come out of that is Cars, but Cars Land at California Adventure looks pretty damn awesome. So I withhold judgement until I get to experience it in 14 days.

So people, PLEASE STOP COMPLAINING AND LET DISNEY DO ITS MAGIC. When Episode 7 comes out, THEN start complaining. Or start cheering. Whatever floats your Jabba barge.