Sooo, I was supposed to post the second half of my PDX Eats series like a month and a half ago or something like that. My bad. It’s been so hard trying to write little blurbs about these places without getting hangry and homesick for a place I’ve only visited once. UGH! Anyhow, I finally powered my way through it just for you, my little ponies.

Without further ado, here are some of the other tasty places I got to visit while I was in Portland… 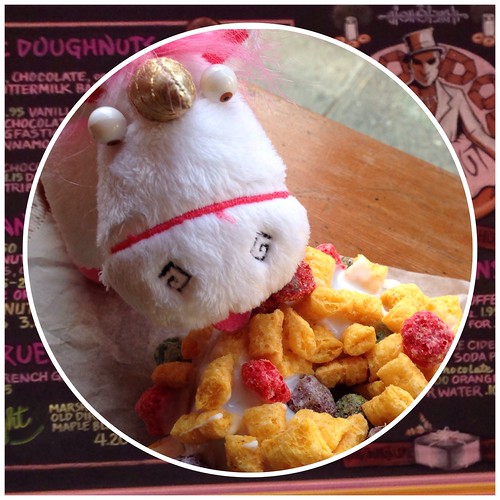 Like many, I first heard of Voodoo Doughnut through the Travel Channel (or was it the Food Network? I don’t remember), and I desperately wanted to try one of their quirky sweet concoctions SO BADLY. But over time I kept hearing that it was extremely overrated, and my interest waned. But with it being a 20 minute walk away from our hotel, Caitlin and I decided to try it for ourselves so we could form our own opinion. I tried the Captain My Captain, which consisted of Cap’n Crunch Berries sprinkled over vanilla frosting. The verdict? I thought it was yummy, but not life changing.

Pro-tip: Go on a weekday early in the morning. During the weekend the line went for miles — okay, not really, but it was crazy, stupid long enough to make me not want to join the queue. We went on a Monday morning around 8ish and there was no line! You might also want to visit the website before your journey so you don’t stand there looking at the menu like, “What the hell is the Memphis Mafia?” and order “the one with the Cap’n Crunch Berries.” <– yeah, I did that. 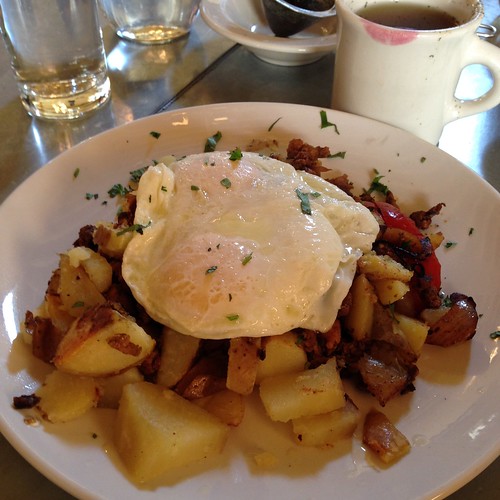 Jen and I went to Bijou Cafe for breakfast before we headed to Saturday Market on a Sunday morning. I usually don’t eat chorizo which dumbfounds me, because it’s tasty as hell, so I opted for the chorizo with eggs and potatoes for breakfast because you can never go wrong with potatoes for breakfast (second breakfast, lunch, and dinner). Plus I recall it being the yummiest looking item on their menu (in my mind’s eye, anyhow). It was nice and hearty, which is just what I needed that day since we were walking all over the place, searching for fun knickknacks and whatnot at Saturday Market. 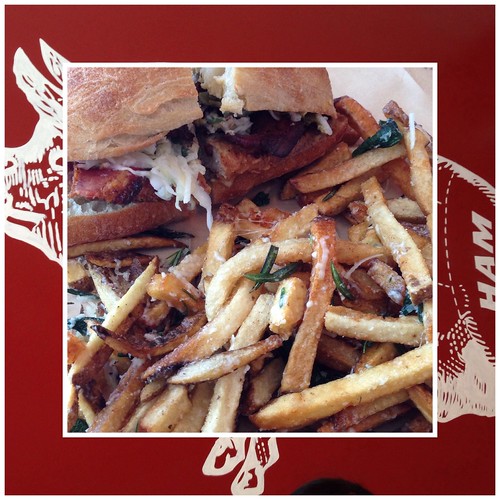 The name of the restaurant sounds a bit unappetizing, but good grief did I enjoy my meal ever so much! And I left not feeling like Jabba the Hut, so that’s always a good thing, right? Lardo’s menu mostly consisted of pork, but the special of the day was a sandwich with fried chicken which I believe just got added to their menu (Fried Chicken & Tasso Bacon), and chicken is my favorite kind of meat, so I immediately went for that. That doesn’t sound very adventurous, sticking with things I like, BUT it also had slaw and relish which are ingredients I normally stay away from. So I’d like to think I made a bold choice. And their fries. Oh. My. Gawd. THEIR FRIES HAD PARMESAN AND FRIED HERBS SPRINKLED ON TOP OF THEM. ALL CAPS NECESSARY BECAUSE IT WAS SO GOOD. If you are not a vegetarian and find yourself in Portland, you should go there and thank me later. 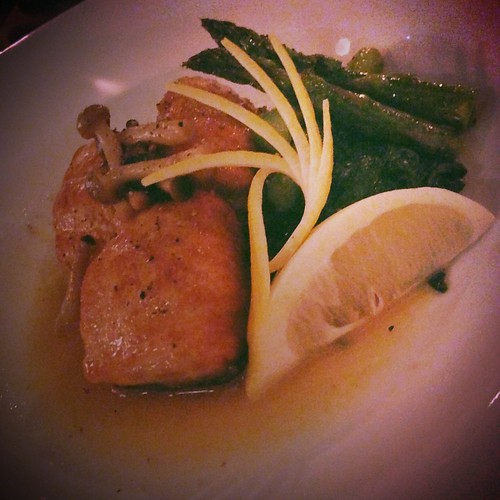 We stumbled upon Ahi Sushi while trying to find a place to eat dinner before having cocktails at Fifty Licks. The ambiance gives off a bit of an “expensive sushi bistro” vibe, but my Salmon Butteryaki dish was only $11, including tip. I was totally astonished by how affordable it was. And look at the fancy presentation! The portion was just right and the salmon was perfectly flaky too. Why can’t my town have a place like Ahi Sushi where I don’t have to pay an arm and a leg for a delicious salmon meal? 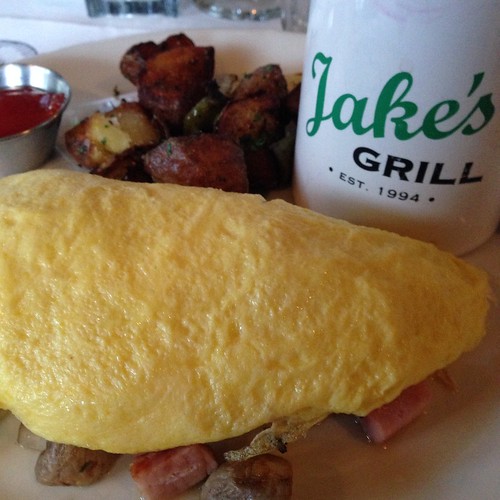 We ate at Jake’s Grill for our last meal in Portland. Jen’s guild buddy met up with us and we walked around trying to find a place to eat breakfast. I was at the point of hunger where I felt like I was going to punch someone in the face, and we FINALLY came across Jake’s Grill. I felt positively fancy dining there as they served fresh baked biscuits with jam and freshly squeezed orange juice. The restaurant also used to be part of a hotel, and I know you can’t tell by the picture I took, but it was chez fancy pants. And my omelet was nice and cheesy and full of ham and mushrooms. I’m not crazy about mushrooms, but I’ve grown accustom to them. Oh, and the potatoes had a nice little crisp to them. Breakfast food is the best food. 🙂

Maybe it was the taxidermy animal heads mounted above the bar and the fact that I was eating meat and eggs, but Jake’s Grill seems like a place Ron Swanson would eat a nice and hearty meal at. And by hearty I mean meaty. 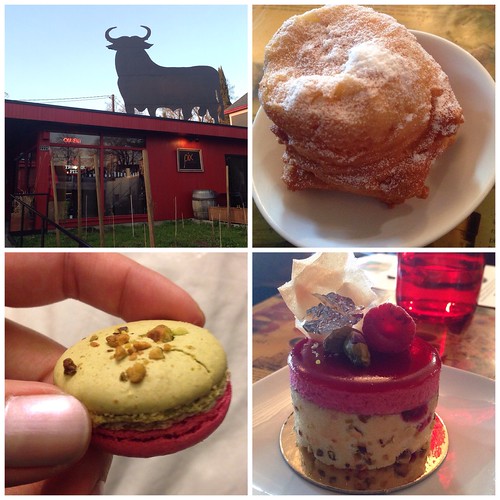 Pix Patisserie has deep fried macarons, so it was a no brainer to put it on the places-we-must-eat-at list. The decor at Pix was so charming — the walls were covered in deep red damask, tables were decorated with vintage French art, and the bar table was full of bottle caps underneath plexiglass. I tried the Jane Avril (named after a famous can-can dancer) which was a little piece of heaven on a sponge cake with raspberries, pistachios, and raspberry mousse, and also a deep fried raspberry macaron. It was good, but I think it would’ve been better if I had a chocolatey deep fried macaron rather than a fruity one. Jen and Caitlin both got the Amelie (named after the film’s titular character), and I’m all kinds of forlorn that I didn’t take one to go because it was –insert another phrase for amazingly delicious because I can’t think of anything else-, but I put in an order of 5 maracons to go and there were other foods that needed to be eaten. I got the fleur de sel, spumoni (pictured above), annnd I can’t remember the other flavors I got since it’s been like a month and half since my trip. I really should’ve written this thing as soon as I got home. slaps self

I do recall thoroughly enjoying every piece I ate though, if that says anything.

Alright, that concludes all the tasty places I had to pleasure of eating at in Portland! I can’t wait to go back… I have no idea when my booty will make its way there again, but hopefully it won’t be too far off in the future. And next time I’m going to hit the food trucks! 🙂