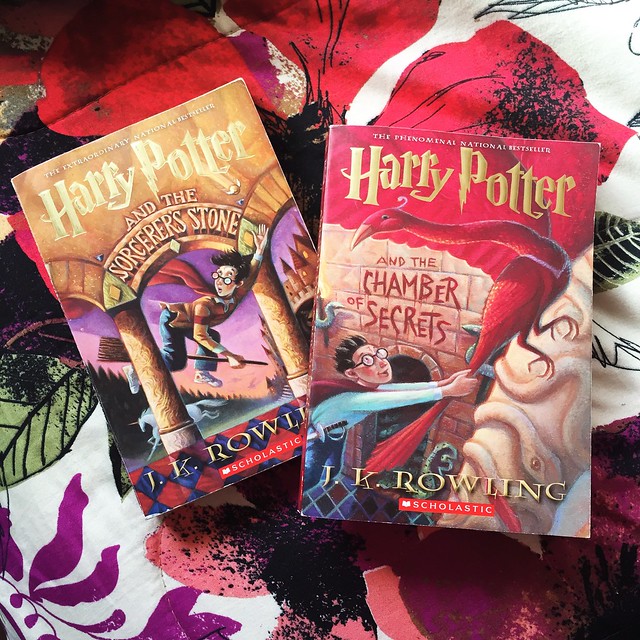 I’ve been wanting to re-read the Harry Potter series for quite awhile now. I purchased a box set of the complete series three years ago with the intent of starting it then, but I kept getting distracted whenever I picked up The Sorcerer’s/Philosopher’s Stone. I’ve mentioned it on here before, but I find myself having a hard time focusing whenever I try to dive into a book. It’s really annoying! Finding audiobooks to listen to while reading along has helped a lot, and I’m so happy I finally found the hard drive I had all my Harry Potter audiobooks on!

What finally made me get back into the series, aside from finding my audiobook files, is most likely the hype surrounding all the Harry Potter related things happening this year — the Wizarding World of Harry Potter is FINALLY opening up on the west side very soon, Harry Potter and the Cursed Child, the eighth story in the series, is coming out in July along with the stage play in London, and Fantastic Beasts and Where to Find Them comes out in November. Plus Pottermore’s come out with brand new information on witchcraft and wizardry in North America and articles about other wizarding schools around the world. It’s just a really amazing time to be a Potterhead right now!

I knocked out the first and second books in a little over a week and I’m nearly done with The Prisoner of Azkaban (my favorite of the series). It’s been really interesting revisiting these books as I have only read the series once through back when I was a sophomore in high school. It was around the same time the first Harry Potter movie came out, so the first four books were out already, and then I had to wait patiently for books 5-7 to come out! Knowing what’s going to happen with each story, I can see the subtle clues J.K. leaves and it’s just mind blowing. Oh, and I’ve been listening to the readings done by Stephen Fry and I’m seeing that my copies have been (understandably) super Americanized, so I’ve taken the liberty to make corrections because I want to read it the way J.K. intended! Plus when it referred to football as soccer, I was like, “This is based in the UK. They don’t call it soccer there. America is like the only country that says that. STOP INSULTING MY INTELLIGENCE!” Raaaawwwrrr!

How many times have you read the series? Do you plan on reading them again soon? Have you read them at all?! Let’s talk about it in the comments section!