Welcome to another Wookiee Wednesday! Ever since Force Friday, us Star Wars fangirls (and boys) have been bombarded with all kinds of superb clothes and accessories from various different companies to fulfill our geeky fashion needs. To say it’s been seriously overwhelming is an understatement. I am constantly having to tell myself to cool my jet-packs (heh) and put my wallet away. There’s just soooOoOoOoo MUCH to chose from! What’s a fangirl to do?!

I started getting a little overwhelmed when choosing which accessories and whatnot to feature, but then I decided to narrow it down on things from the lighter side of the Force. I’m always “dark side this, and dark side that,” so I think it’s time to restore some balance on the blog. 🙂

Have you discovered and/or bought any awesome Star Wars goods recently? Or maybe have your eye on something? Tell me about them in the comments!

While I’m away, Le Fancy Geek Boutique is having a sale! Save 15% off your purchase with the code ALOHA15, good until September 21.

I just restocked the Stormtrooper, Princess Leia, and Han Solo necklaces too ☺

It takes 1-2 weeks for me to send out orders, but since I’m in Hawaii, any orders placed from now until the 18th will have 1-2 week delay. 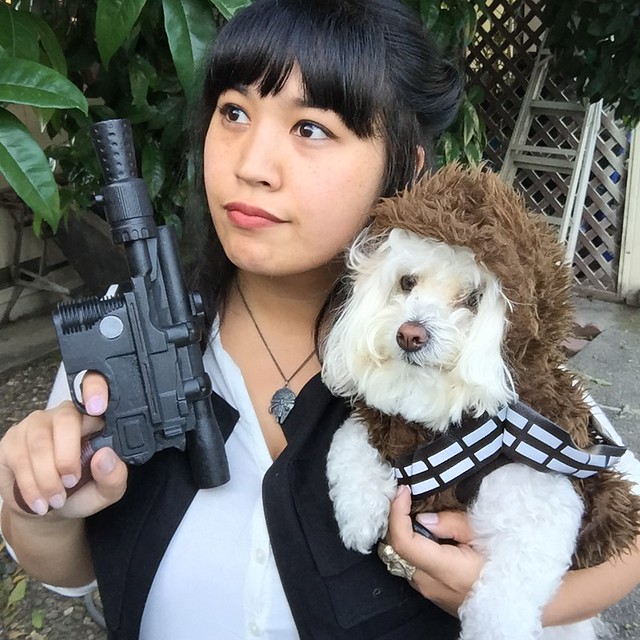 My little Wookiee and I would like to wish you all a happy Star Wars Day, and May the fourth be with you, my little ponies! Or shall I call you my little tauntauns today? 😀

I’m actually wearing my Boba Fett dress today and me and my friend (who is also wearing their Boba Fett dress) are getting boba (that pearl drink thingy) after work to celebrate! Also, in honor of today you can save 15% off at Le Fancy Geek Boutique until Sunday, May 10 with code CHEWIE15. A couple of new Star Wars necklaces will be up later today! 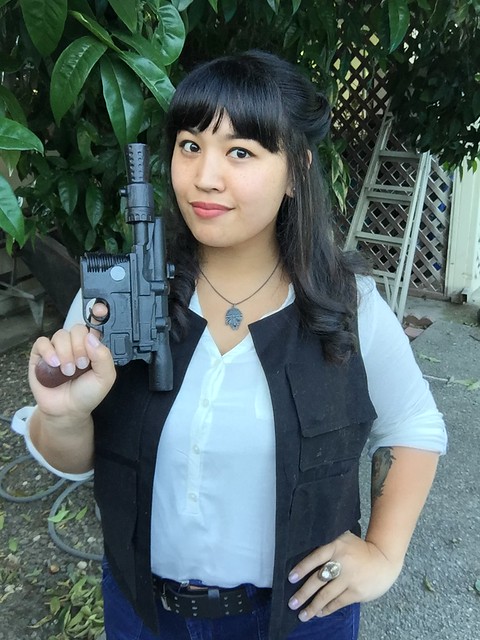 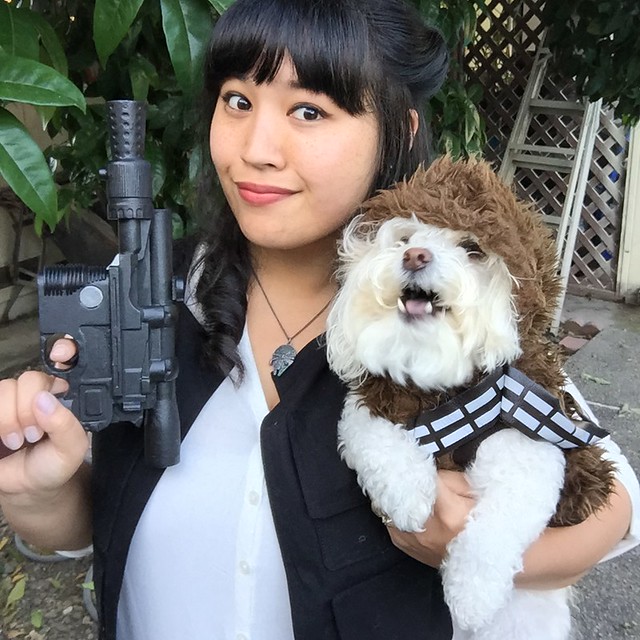 PS: Happy Audrey Hepburn Day too because today is her birthday! And Lance Bass from *NSYNC. Haha! 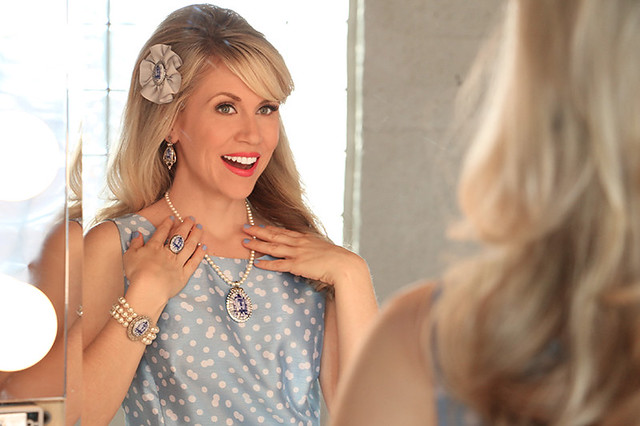 Good grief, Her Universe. Just shut up and take all my money!

Ashley Eckstein, geek girl extraordinaire, voice of Ashoka Tano on Star Wars: The Clone Wars, and creator of Her Universe (a fashion line created with the geek girl in mind, in case you didn’t know) just debuted some new fancy Star Wars pieces during Star Wars Weekend at Disney World, and it’s pretty much every geeky fashionista’s wet dream come true. For those of us that couldn’t make it to the launch at Star Wars Weekend, we’ll be able to start ordering all these geektastic tops and dresses tomorrow on Her Universe’s online store!

Her Universe also teamed up with Tarina Tarantino‘s The Sparkle Factory for a line of high-end baubles called the “My Hero Collection” featuring R2-D2 (pictured above and below). So pretty! 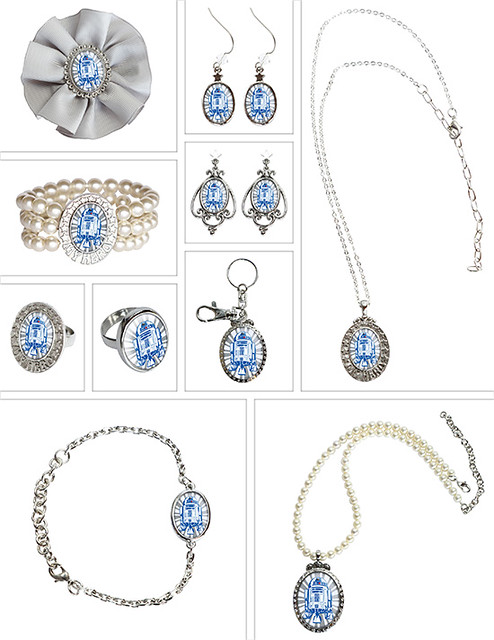 What I’m looking forward to the most is the baby blue dress with the original print of the Star Wars bed sheets that came out in the 70s. I love the vintage vibe it has, and it has a Peter Pan collar! It’s definitely different than the other dresses in the Her Universe line, and I really hope they’ll come out with more dresses that are styled like it. And I hope they come out with more cap-sleeved dresses like the Han Solo one too (pictured below)! 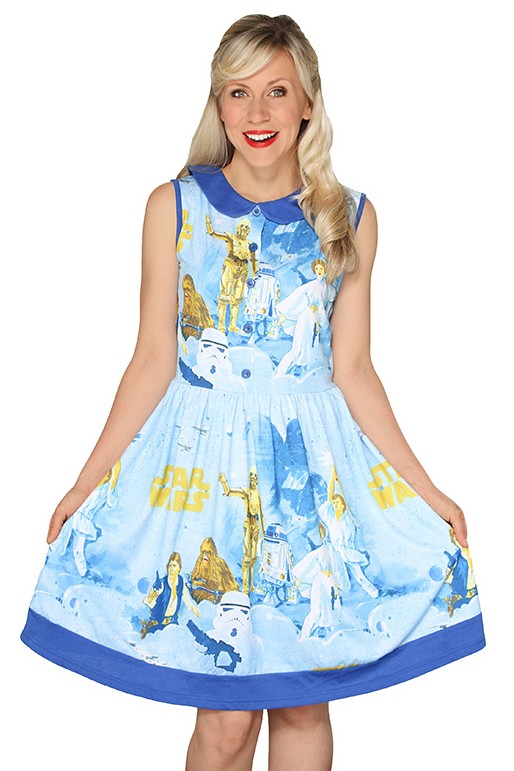 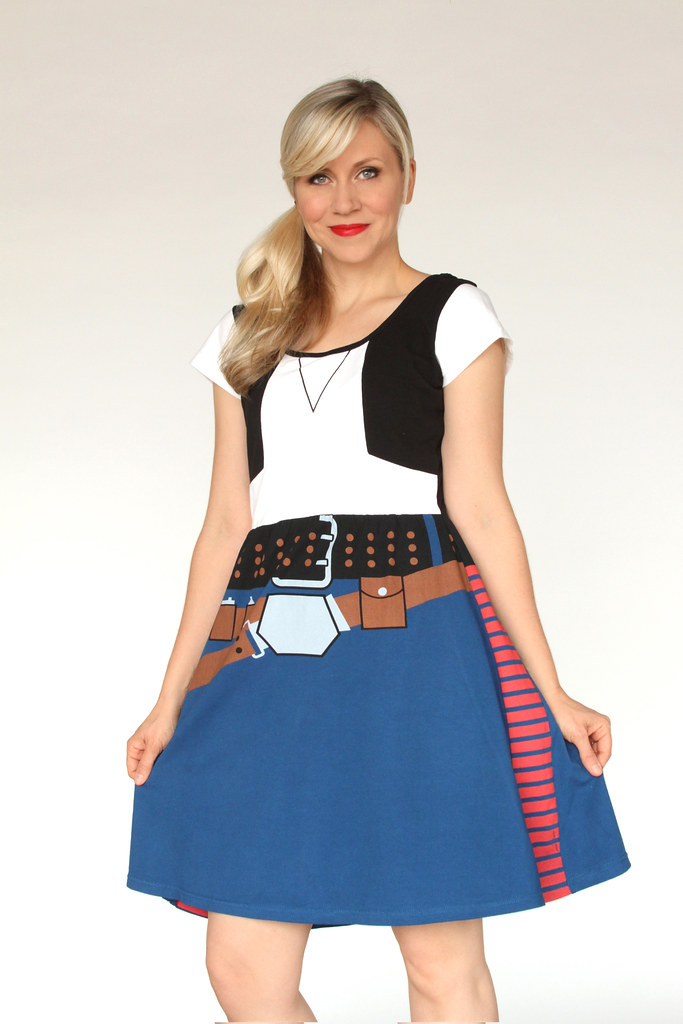 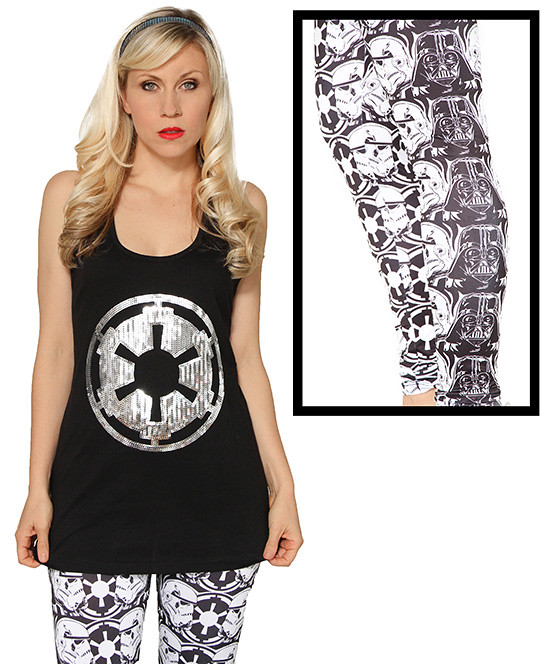 Check out more of the new Star Wars threads here.

Last month for my birthday, my friends and I went to the Star Wars: Where Science Meets Imagination exhibit at San Jose’s Tech Museum! It was so fun seeing some of the props and costumes from the Star Wars saga. I feel like there could’ve been more things on display (no ewoks, tauntauns, Lando Calrissian, Boba Fett (he made an appearance there only recently), or Queen Amidala’s ornate ensemble from The Phantom Menace), but I still really loved seeing what was there, like Chewbacca! There was a sign that said he’d be leaving for the Smithsonian on January 16, so I’m really glad that I was able to see Chewy before he left. 🙂 And there was also a wampa, and jawas, a model of the Millenium Falcon, and Darth Vader and a Stormtrooper AND OTHER REALLY AMAZING AWESOME THINGS!

Here are some of the pictures I took while I was there:

This is the only Northern California stop for the Star Wars exhibit and its stay has been extended until the 23rd of March, so if you’re a huge Star Wars fan, you should definitely stop by! Who knows what else they might add to it!

Oh, Valentine’s Day. Or Single’s Awareness Day to the unattached.

To the masses, it’s just a stupid holiday that candy confectioners, floral arrangement businesses, and greeting card companies came up with in order to rake in a few extra bucks to keep momentum up after the fall/winter holiday season.

For years, people have assured me that Valentine’s Day isn’t just a day to celebrate romantic love, but all kinds of love — familial love, friendship, whatever. The cynic in me wants to call bullshit on that because if you look at the merchandise, that’s all it’s really targeted for. But the Edgar Allan Poe tote and chocolate dipped Oreo my mom gave me (and the other presents she’s given me on past V-Days) and the stuffed unicorn I’m going to get from Jen later today says otherwise.

I remember listing Valentine’s Day as one of my favorite holidays as a youngling because I liked the fact that we dedicated an hour of the day at  school to eat cookies and drink punch and pass out super adorable cards to classmates and get super adorable cards in return. But then it stopped happening. Suddenly, I became painfully aware that Valentine’s Day was for romantic couples. And at school we were given the option to buy Crush-o-Grams or some other sort of treat to send to friends during the day, and if your name didn’t get called by the delivery person, well, it was just a bit soul crushing. I always found myself bitter because I didn’t have anyone to call my Valentine, or just didn’t have anyone in general, and the only person who ever sent me a Crush-o-Gram in high school was my mom and she marked it as “From Jon Bon Jovi” because I was totally into 80s music my junior year of high school and I thought Jon Bon Jovi was pretty hot. “You couldn’t have at least put Orlando Bloom? He’s my age appropriate crush! And he’s cuter!” I said to my mom after receiving it. It was a sweet gesture, but so embarrassing! I love her for it anyway.

Even though I had someone for two years to call my Valentine, and oh God was I ever excited to celebrate my first one as a non-single lady, I still thought the holiday was a bit stupid. Like many others have argued, I agree that it shouldn’t take one particular day of the year to make all these grand gestures to show the person you’re with how much you love them. But to be completely honest, I have to admit that I relished the fact that I wasn’t alone and could properly celebrate the day by social standards if I wanted to. You’d feel the same way if you spent 24 (or 25?) consecutive Valentine’s Days alone, wouldn’t you? And I thought I didn’t have to ever worry about being alone each time the 14th of February rolled around till the day I died. Silly me for being so confident in my last relationship. I also grew up with a father that sent my mom a beautiful bouquet of flowers no matter what each year. Even if he was in the Philippines (which he was for quite a few Valentine’s Days), there’d be a bouquet waiting for my mom at work. Oh, and this year he decided to put the flowers together himself (tulips instead of his usual go-to red roses). So yeah. Expectations. I haz them… thanks to the way my dad treats my mom and Disney movies. Stupid Disney movies.

And now I’m back to where I started. Flying Solo with no wookiee to keep me company in my cockpit. Today also marks exactly two months since my break-up, so I can’t help but feel a bit woebegone and angry on this day where romantic love is glorified and I’m still trying to cope with the fact that I don’t have it anymore, and probably won’t for quite some time.

George Takei posted this  meme on his Facebook page with a caption that says: “Proof that you can be just fine alone today.” I’ve done this 24 or 25 times alone before. I can do it again. And I’d like to think I’m Han Solo, so this cheered me up a wee bit.

Whether you’re taken or single, I hope the day treats you well.