Things have been pretty quiet over at Le Fancy Geek Boutique, but it’s still open for all your fancy fandom needs this holiday season!

Hogwarts house necklaces have just been added to the store, so now you can proudly show off your house pride! Or you can get one for the witch or wizard in your life. Just use code “SMALLBIZ16” during checkout to save 20% off your order from now until Tuesday, November 29. 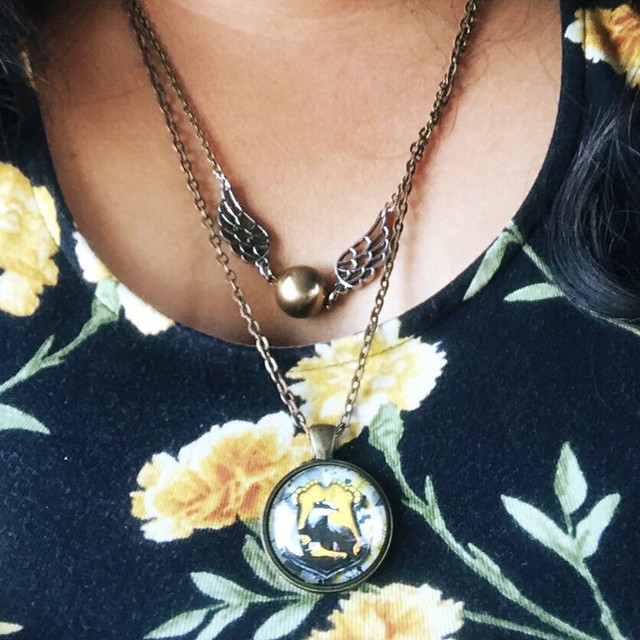 Happy Small Business Saturday! And for those braving the busy storefronts this weekend, stay safe!!

I can’t help but feel like a bit of a phony when I wear my Gryffindor cardigan since I was sorted into Hufflepuff  on Pottermore (whut whuuut!), but in my defense my sister bought the patch for me when she went to Comic Con for the first time (that was 10 years ago!), and then I sewed it onto my cardigan so I could dress up like a Hogwarts schoolgirl for the last Harry Potter movie (see here) — all that happened waaay before Pottermore! Besides, it totally goes with my hella awesome Hermione Granger shirt that I just bought from Teefury!!!

If the design looks familiar, it’s by Megan Lara who I featured in my Curator’s Corner series not too long ago. Oh, and her Luna Lovegood design is currently available on Teefury as well. Oh my glob, just take all monies, Megan (and Teefury)!

It’s Halloween and I still don’t know what I’m going to dress up as. RUGH. And my plans are still unclear as I was originally going to have a Doctor Who marathon with Jen, Marcos, and Shanice at Shanice’s place, but I haven’t been able to get a hold of Shanice to confirm what time and what we should bring, etc. WHERE ARE YOU WOMAN? CALL ME! As an alternative plan, we’re thinking of going to Dell’Osso Farm’s pumpkin patch to check out the maze. As for my costume, I’m taking the DIY route by just looking through my wardrobe to see what I can put together. It’s been quite frustrating.

I managed to put an 11th Doctor outfit together, but when I put it on I looked all frumpy because my boobies are too effing big. *shakes fist at the heavens*

I was Diana Prince last year, and Karen O the year before… I don’t really want to do repeats. And I don’t know where my Wonder Woman costume is (and the bustier totally stained my white button-up shirt). So I guess I’m left with Minnie Mouse and Hogwarts school girl (which I wore in July for the last Harry Potter movie, you can see that here).

Well, I hope everyone else has a happy and safe Halloween!!!

Watching a movie at 3:30 am in a city an hour and a half away might actually not be the greatest idea ever. I know I did it last year, but I lived a half hour away at the time and managed to slip in a good 5 hour nap before going (I could NOT fall asleep before we left around midnight!), so that made sense. Yesterday, when I got home after we ate breakfast (around 7:30 am), I knocked out for the rest of the day. I even fell asleep wearing my costume thinking I would take pictures for this blog when I woke up (since the ones I took at the theater came out blurry), but I was completely groggy and zombie-like. Rugh. But it was all for Harry Potter! I wouldn’t do that for just any movie, so it was worth it. 🙂

Anyway, to our surprise there were TONS of people at the Metreon for the 3:30 am showing. In fact, it sold out! We moved like cattle as we tried to form a queue to get into the theater. This is what we were hoping to avoid. And I spent $4.50 on a greasy, doughy pretzel. WTF? Movie theater pretzels are usually yummy!

Nonetheless, I thoroughly enjoyed the movie. I knew I was going to cry buckets since I knew certain things were going to happen with several characters (*CRIES A TRILLION TEARS*), but I forgot to bring tissues with me! Alan Rickman’s performance as Severus Snape made my heart hurt. I could not stop bawling. That man deserves an Oscar nomination. SO AMAZING! And Maggie Smith unleashed Professor McGonagall’s bad-assery-ness.

I even got misty eyed during some parts that weren’t even sad. I was just thinking, “This is it. After this, it’s all over.” I’ve read some things on Tumblr with people complaining about us Potterheads and our whining about how it’s the last movie. Star Wars fans (that apparently don’t like Harry Potter) are like, “When it [Star Wars] came to an end, I was okay. I accepted it. I didn’t cry about it.” And I’m sitting here thinking, “IT’S NOT THE SAME!!!” Star Wars had 6 films, and Star Wars: The Clone Wars is out on Cartoon Network (I think?), and there’s all these books that have been written and are still getting released; something new is always happening with Star Wars. Harry Potter fans don’t have that. I mean, we’re getting Pottermore later, but that’s it as far as we know.  So give us some slack and let us mourn the end of a glorious era! Jerks.

Now if you’ll excuse me, I shall continue listening to the Harry Potter & the Deathly Hallows audiobook as I clean my room.

It’s Harry Potter & the Deathly Hallows Pt. 2 eve! While I’m extremely excited that the final movie is coming out, I’m also sad because there’s nothing else to look forward to. No more books. No more movies. Pottermore is coming out at the end of the year, but it’s not the same! The end of an era is nigh. 😦

I’m not going to the midnight show, but Jen, Shanice, and I are trekking to San Francisco to watch it at 3:30 am in IMAX 3D. Last year, when Jen and I still lived in the bay, were planning on going to the midnight show for the last HP movie, but they sold out. The next available one was at 3:30 am, so we went and it wasn’t all crazy. There were still lots of people, but they weren’t all rowdy and whatnot. So we’re doing it again!

Since this is the last hurrah, I’m dressing up like a Hogwarts student! Gryffindor to be exact. I’ll be throwing on a button-up shirt and tie later. And since I don’t have a wand, I’m just going to bring my Sonic Screwdriver (I’ll be a Timelord wizard!). Note my scarf — Jen knitted it for me! 🙂

Last night I spent what seemed like an hour and a half sewing this Gryffindor patch onto my cardigan. My sister bought it for me 8 years ago at Comic Con. I’ve always meant to put it on a cardigan or blazer. Finally did so last night, and I have to say, it was a bitch. The patch is really thick, so it was hard weaving the needle in and out.