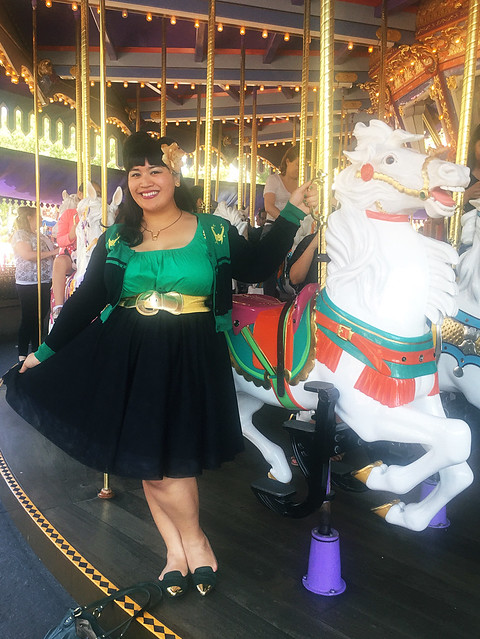 Fall Dapper Day at Disneyland is happening today and I am having a major case of fomo. I love going to Dapper Day because it’s so fun to see everyone decked out to the nines. I got to go to the Spring Dapper Day event back in April; my friends and I coordinated with Marvel themed Disneybound outfits. I was torn between putting together a Captain America outfit or a Loki one, but Loki’s got way more swag and I have more green, black, and gold in my closet than red, white, and blue. Spring Dapper Day took place a few days after my sister’s wedding, so Shanice helped me keep my victory rolls intact because I thought they’d go perfect with my pinup inspired Loki ensemble. My hair was so crunchy and flaky from all the hairspray I used, but that’s what happens when you’re burdened with dapper purpose 😛

Since Thor Ragnarok hit theaters I’ve got both of Odin’s boys on the brain, and I saw that guests can now meet both Thor AND Loki at California Adventure!! And BTW – how AMAZING was Thor Ragnarok?! Captain America will forever be my fictional husband, but Thor is legit the best Avenger, and I’m so happy with the direction this film went in. Taika Waititi for all the things, please!!

If you’re wondering, “If these are from April, why it she only posting about this outfit now?” Y’all… it’s been a busy year. I’ve got a back catalog of outfit pics and other things that have yet to be posted on here. I’m trying to catch up, I swear! 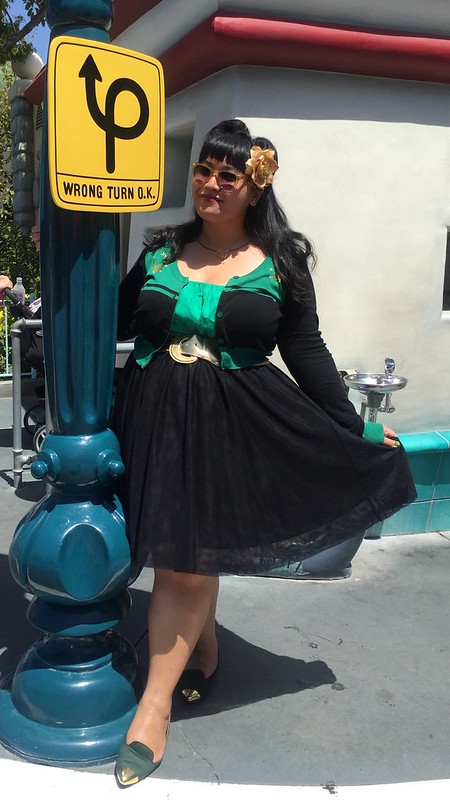 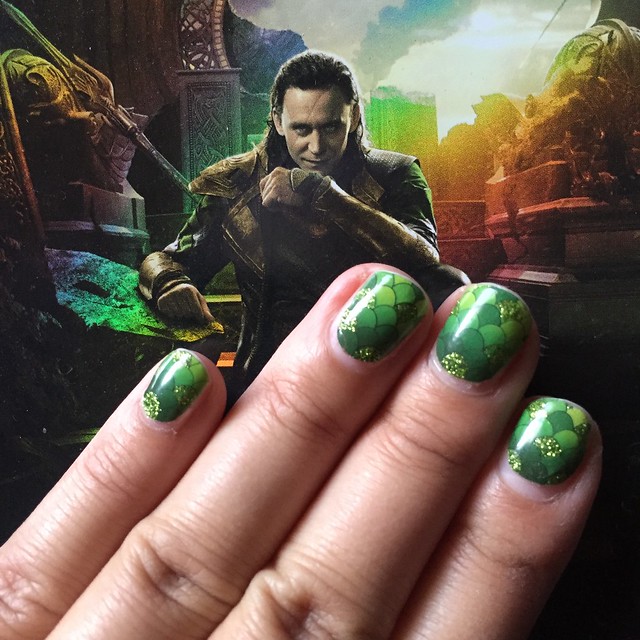 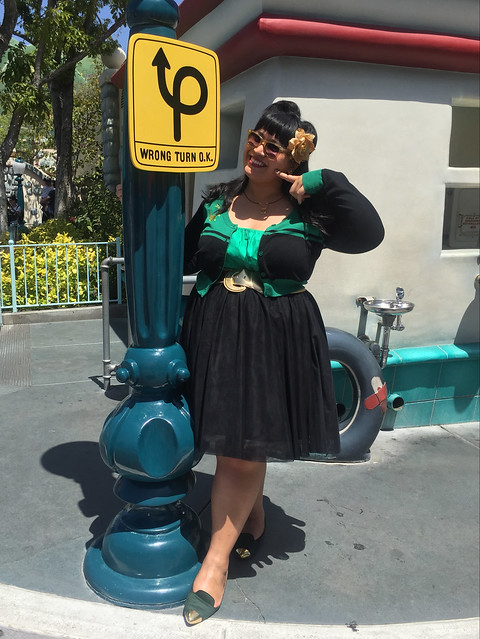 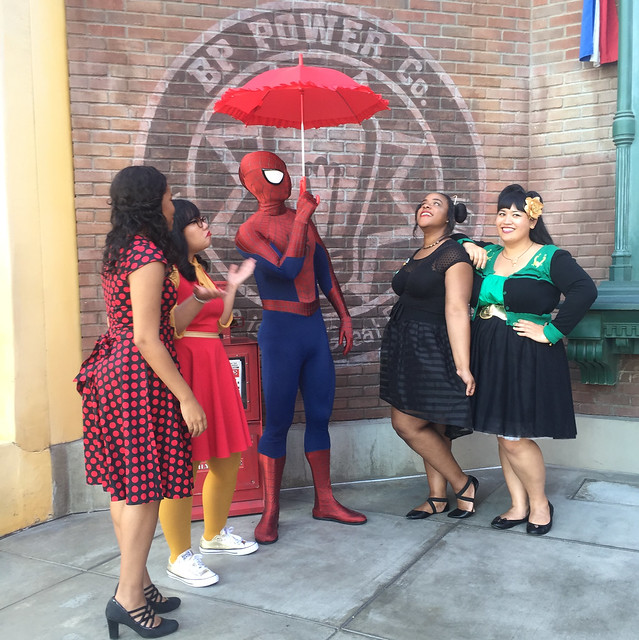 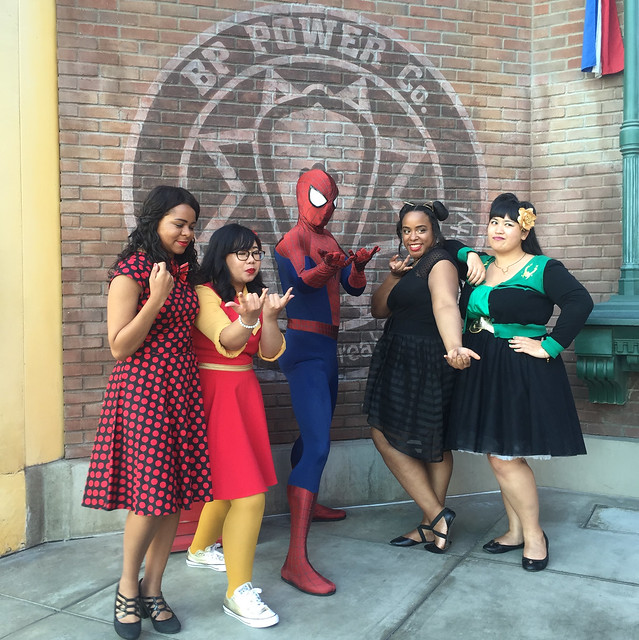 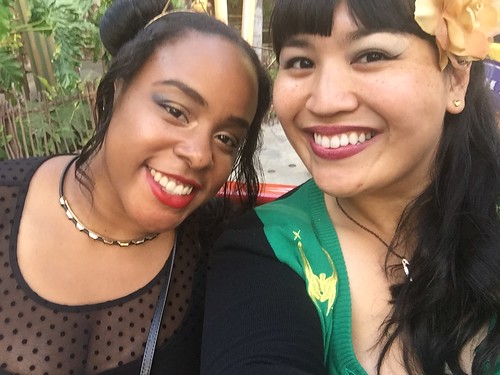 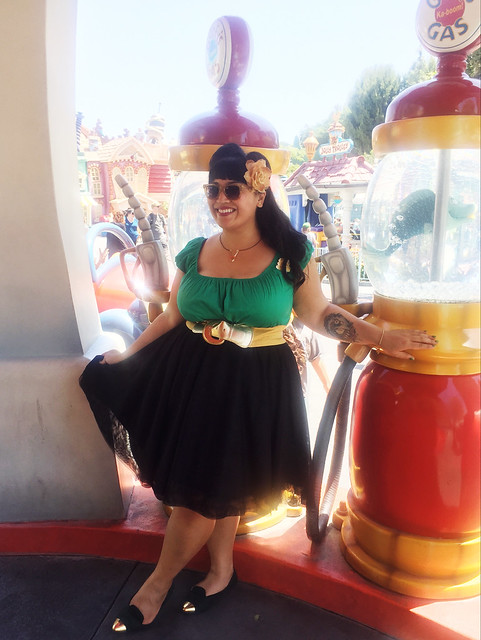 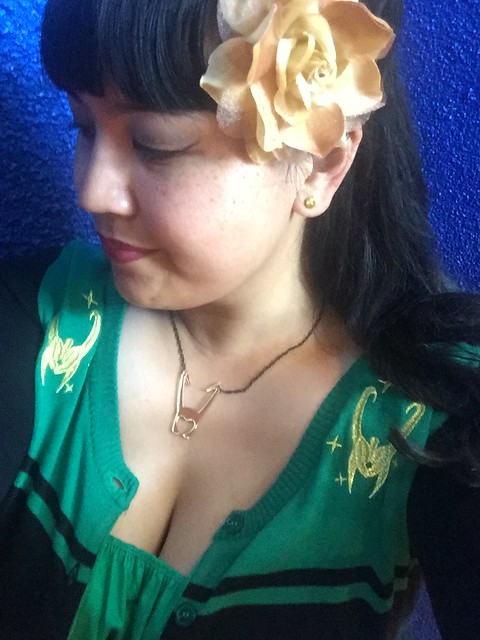 Did you go to Dapper Day? Did you Disneybound? Have you seen Thor Ragnarok yet? Let’s talk about it in the comments section! 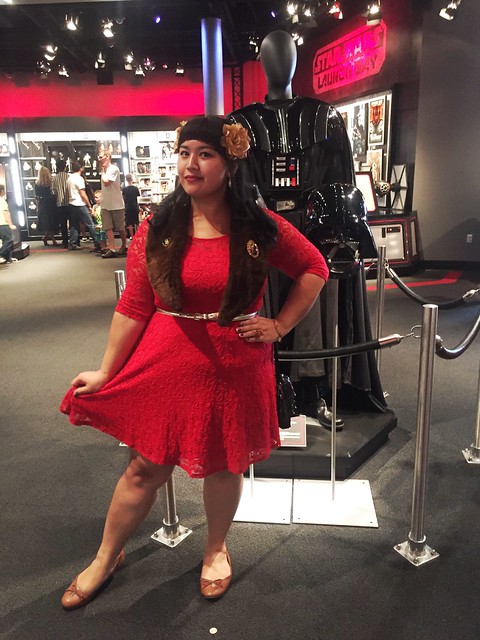 At the beginning of the month I got to go to Dapper Day at Disneyland! I knew for sure that I wanted to throw together a fancy looking Star Wars Disneybound, so I decided to seek inspiration from Queen Amidala. She is by far the most dapper character from the Star Wars universe as far as I’m concerned. I mean, the lady has tons of ensembles to choose from! For my Dapper Day outfit I decided to go for her most iconic look: the red and gold outfit we first see her in in Episode I: The Phantom Menace.

When brainstorming outfit ideas, I looked up pictures of it online and paid close attention to certain details as noted below: 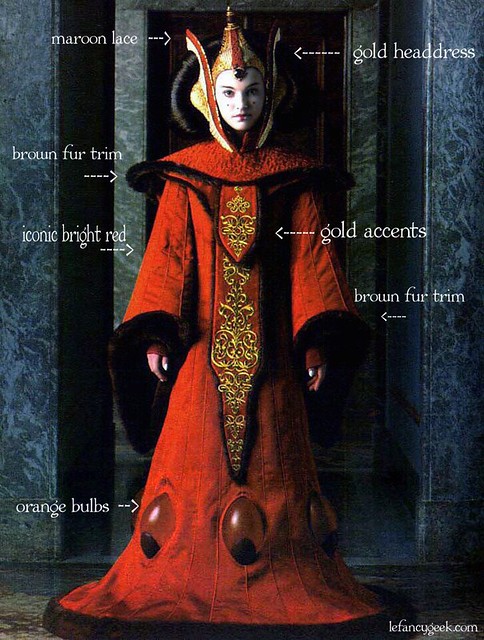 If you’ve been a reader of my blog for awhile, you know I’m a stickler for details.

To emulate her headdress, I purchased maroon flower clips to stand in for the maroon lace and garnet gem, and I got these really pretty gold flowers at the Dapper Day Expo the night before. Thank goodness too, because I originally had a bunch of small gold flowers that I was going to put on bobby pins. What a nightmare that would’ve been to frantically make the night before! #ProfessionalProcrastinator

For the fur trimming, I took off the detachable brown fur collar of an old blazer I have and used it as a stole. As you can see in the pictures below, I put a Queen Amidala brooch I made on it along with a heart shaped Vader pin since Anakin’s her boo. I also used my little Darth Vader purse by Loungefly 😀

Other little details include a vintage orange ring that matches the orange bulbs along the hem of Amidala’s dress, a Princess Leia bracelet, and gold chandelier earrings that replicate the ornate gold embroidered details on her dress (or robe?).

It was so much fun seeing so many people dressed all fancy at the park! Hopefully I’ll be able to go to the next Dapper Day event in November, but plans have been made to go next spring 🙂 My friends and I are going to do dapper Marvel Disneybounds. I’m still trying to figure out if I want to do a Loki, Captain America, or Agent Carter inspired outfit. I have a year to decide though, so I’ll let Future Nina deal with that.

Were you at Dapper Day? If so, how’d you dress up? And if you weren’t, what kind of outfit would you like to put together if you did go? Let’s talk aboot it in the comments section! 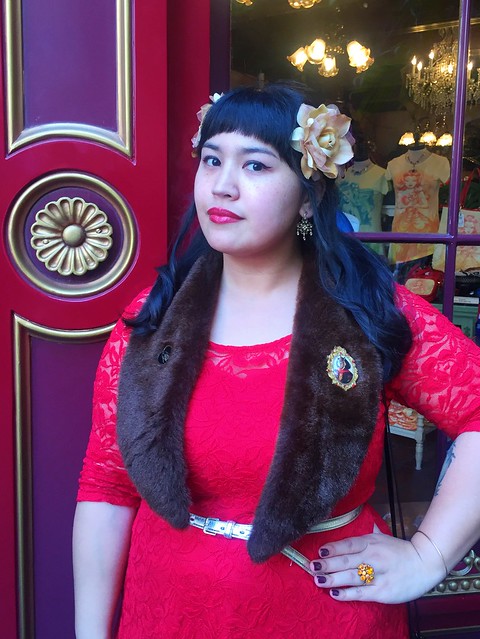 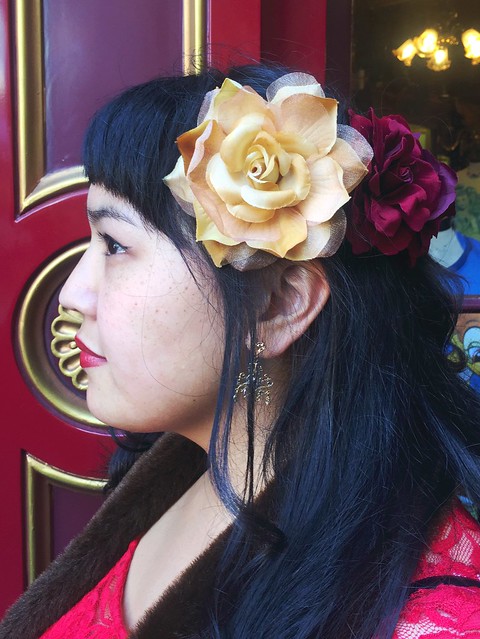 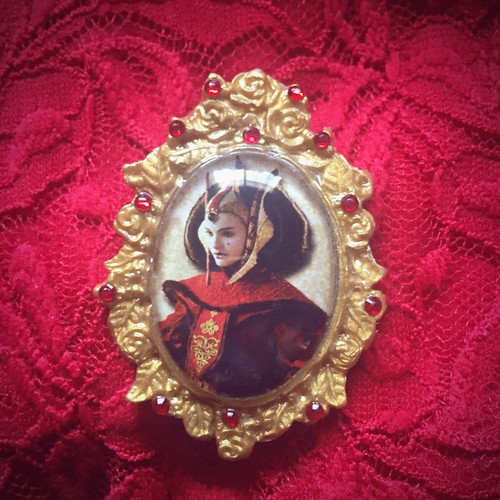 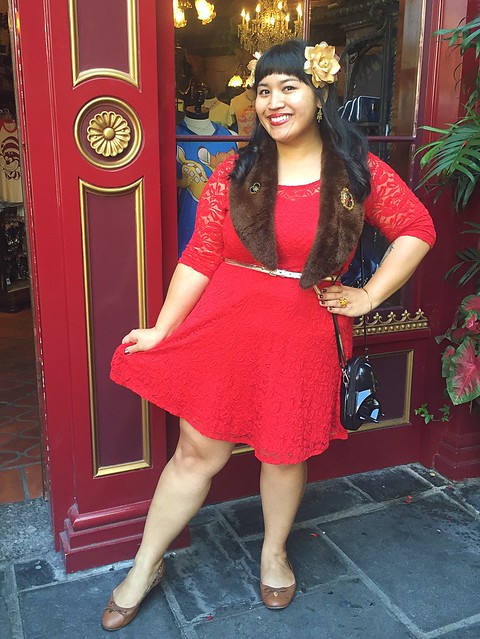 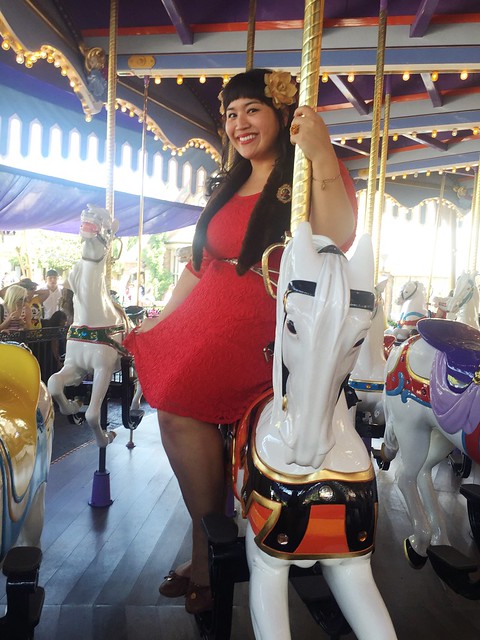 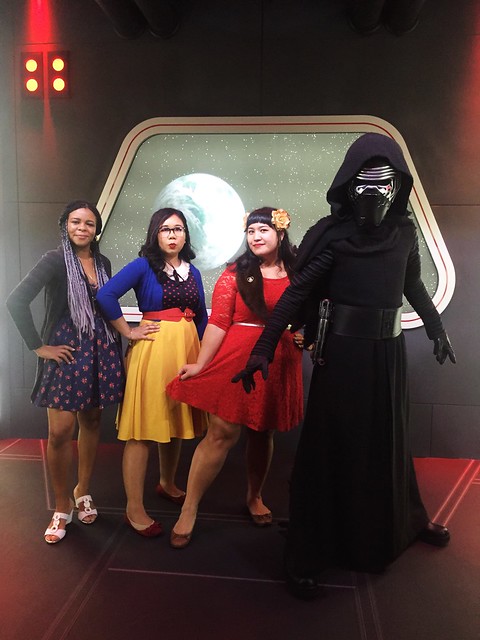 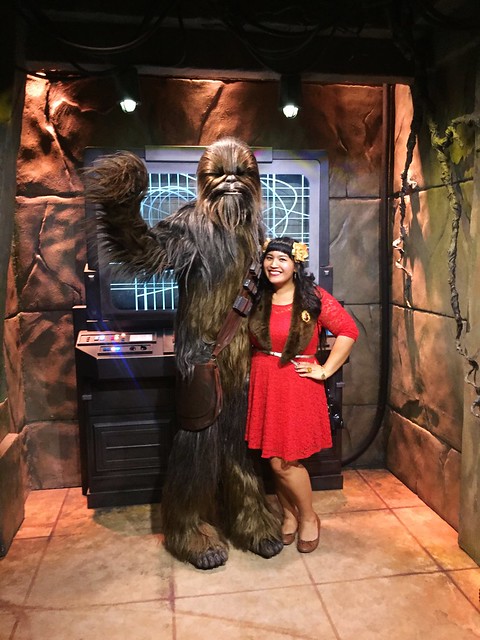 Picking out an outfit for Dapper Day was extremely frustrating for me! I wasn’t sure whether to throw an outfit together inspired by  a Disney character a la Disneybound with whatever I had in my closet, or go out and find a new dress. Of course I went with the latter, especially since I had a loaded Macy’s gift card! I ended up getting a blue dress and red cowboy boots. I like calling them my ‘Mosbys’ like Ted Mosby from How I Met Your Mother. And I know, cowboy boots on Dapper Day is kind of… um… not dapper. BUT, I was aiming for comfort! And it’s not like Dapper Day is strictly for “old fashioned” glamour — all kinds of fancy styles are encouraged! Plus I wasn’t about to walk around in heels or ballet flats. Wearing my Chucks to Disneyland sometimes leave my feet aching — imagine what a pair of heels would do. EEK!

And this is basically how I feel about going to Dapper Day with red cowboy boots:

With the blue and the red I figured I would just put together something inspired by Snow White and accessorized with a necklace featuring the Designer Disney version of Snow White that I made myself (see a similar one here)! And I threw together my Vinylmation prince earrings the night before Tim and I left for Disneyland! They’re actually keychains from the Snow White Vinylmation series — I got them on one of my many excursions to Disneyland and ended up getting doubles. That’s usually a bummer (getting duplicates from blind boxed toys), but I thought they were perfect for jewelry making purposes. 🙂

I was originally going to wear my hair down and curl it like I always do, but my dumb ass forgot to pack my Chi hair straightener! I went into panic attack mode once I realized I didn’t have it and thought, “I’m a fashion blogger going to a fashiony-event  and I’m going to want to take pictures for my blog but my hair is going to look like shit. DAMMIT!” I tried putting my hair into multiple buns to curl it, but it looked fug. Then I remembered this tutorial I saw on YouTube on how to make Milk Maid Braids. Click here if you want to watch it. I didn’t get to follow it to a tee, but whatever!

Dapper Day was so fun! I loved seeing so many people dressed up in their finest attire. Even though my annual pass is expiring this weekend (and I am so not renewing it because it is ‘spensive), I’d love to try and go to Dapper Day in the fall (whenever that is).

Oh, and sidenote — the skipper Tim and I had on the Jungle Cruise was a fuggin’ Nerdfighter! Some of you are probably like WTF is that? Go find the Vlogbrothers on YouTube or watch this video. He made a comment about puppy sized elephants (Nerdfighter inside joke) and I was like, “HE’S ONE OF US!” Afterwards I asked him if he was a Nerdfighter and replied with an enthusiastic “YES!” and we high fived and it was awesome, but then I realized Tim exited the boat, so I just waved bye at Kevin, the Nerdfighter skipper, and threw up the Nerdfighter gang sign and said, “DFTBA (don’t forget to be awesome)!” It would’ve been nice to nerd out about John Green and stuff, but I had to go!

With my annual pass expiring very soon (*cries infinite tears of sadness*), Tim and I decided to go to Disneyland for one last hurrah over the weekend and Dapper Day just so happened to be on Sunday!

Dapper Day isn’t an official Disney thing, but twice a year fancy ladies and gentlemen dress to the nines in their finest threads and head to both the Disneyland and Walt Disney World Resort in style. This event was inspired by Disneyland’s concept art from the 1960s where visitors were depicted in dapper attire — think Mad Men.

Many folks were dressed in retro fashion, but I wanted to focus on snapping pictures of the fancy people that let Disney characters inspire their ensembles — this to many on the interwebz is known as “Disneybounding.” The term Disneybounding comes from the DisneyBound site in which its webmaster, Leslie Kay, uses Polyvore to create outfits inspired by Disney characters whether it be for casual or formal occasions. I’ve always let all things I nerd out about influence my outfits, so knowing that there’s this whole movement with devout followers about Disney inspired fashion is just spectacular!

I didn’t get to take as many photos as I would’ve liked to since I didn’t have my business cards handy during the first half of my day. It’d be super awkward if someone came up to you and asked to take your picture for a blog without some physical form of credibility, right? I thought so! But my first fabulous find of the day was this woman named Cindy who had a crazy awesome Mary Poppins outfit. Her hat, red coat, and parrot umbrella were spot on! And I wasn’t the only one enamored by her practically perfect ensemble (haa… see what I did there?) —  a little boy was super stoked to see her and asked to have his picture taken with her. 🙂

There was a DisneyBound meet-up and I read that it was at 3:30, but by the time I got there they were taking the huge group photo and I totally missed the part where people were mingling and whatnot. But after they dispersed I walked into the crowd and approached as many people as I could until it got too overwhelming. SO. MANY. PEOPLE. D:

These two ladies were dressed as Belle and the Queen of Hearts. I’m dumb and automatically assumed they were both Snow White (like me!) with the reds and yellows, but once they told me who they were I was like “Oh! Duh.” Mah bad.

This lovely couple are dressed as Prince Naveen and Tiana from The Princess and the Frog. I saw a picture of them on the Dapper Day Facebook page beforehand, so I was pretty stoked to see them in person! 🙂

I found myself rather envious of the card suite cardigan the girl in the middle was rockin’. Need I even say what characters inspired this trio’s spiffy outfits? I don’t think I need to.

I totally flipped out when I saw this woman’s Tiki Room inspired outfit, and then she went and busted out her parasol when I asked if I could take her picture (it’s just like the ones they put on the Dole Whip floats!)! And you can’t really see it, but she has a tiki god pendent on her necklace.

I’m not sure if this lady was Disneybounding per say, but I thought she looked quite stunning in her retro glam dress and hairstyle so I asked if I could take her picture 🙂

I spotted a dapper Peter Pan in a Newsie-esque outfit and Princess Tigerlily. They were too friggin’ adorable.

Lastly, I found these posh ladies in front of City Hall. I know for sure the girl in the lavender is wearing a Rapunzel inspired ensemble (loved the fact that she had Pascal attached to her shoulder!).

PS: Here’s a peek of my Snow White inspired outfit. I’ll be doing a separate post of my ensemble, you can expect to see that sometime tomorrow!