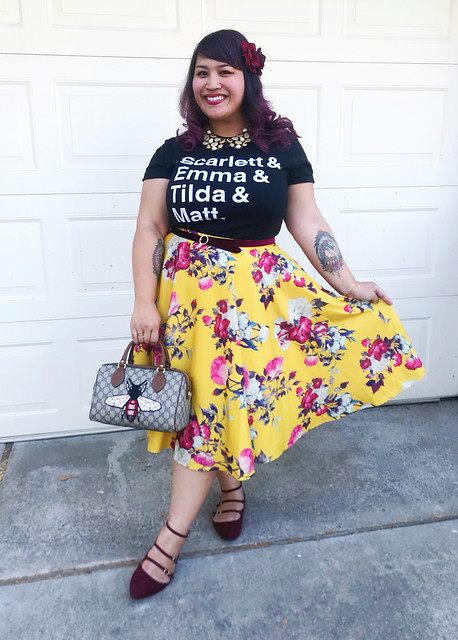 In the spirit of #AsianAugust, I must talk about Crazy Rich Asians. At the time of this writing, I have seen it 3 times! I watched it twice during its Gold Open, and again this past Friday. I seriously can’t get enough of this movie! 🙂

The theater was packed when I watched it the first time (actually, all 3 times!), and it was filled with predominantly Asian people of all ages. You know when you go somewhere and you can feel the energy in the room? What I felt in that theater was akin to every opening night showing of all the Marvel movies I’ve been to. It was contagious. People cheered, laughed, cried, and cheered some more. I took my parents who are both notorious for falling asleep during movies, and I’m happy to say both stayed up for the entire show. They were really excited to see Kris Aquino, a popular talk show host and actress in the Philippines, who played Princess Intan. I was excited to see Nico Santos reppin’ Filipinos, too!

As an Asian American, my emotions were even more heightened when watching this film. And it’s not just because I’m a super sappy and emotional person to begin with. It’s because for the first time in a long time I saw people on the big screen who look like me and my kin, and talk like me and my friends, front and center rather than in the background. They weren’t the stereotypical nerd, kung fu master, dragon lady, or subservient Asian tropes that Hollywood often portrayed us to be, but more so relatable (besides the crazy rich part). I saw parts of my culture reflected on the big screen in an authentic way, and I haven’t felt like that about since The Debut, an indie Filipino American film that starred Dante Basco (aka Rufio from Hook). The Asian diaspora experience isn’t something I’ve seen on screen very much either, which made Rachel Chu’s story, played by Constance Wu, relatable, too.

Growing up, I hardly saw anyone who looked like me in the movies and tv shows I watched. Claudia Kishi from the Baby-Sitters Club and Trini from Mighty Morphin’ Power Rangers were the few fictional characters of Asian descent out there, and I truly saw myself in them. The lack of representation often made it feel like my story or my culture  didn’t matter. So when I see characters like the Tico sisters in Star Wars, Ming Na Wen in everything she does, and now Crazy Rich Asians AND To All the Boys I’ve Loved Before… it’s a phenomenal feeling that I don’t quite know how to describe.

I’ve seen a lot people online say Crazy Rich Asians shouldn’t be considered “monumental” and that it doesn’t represent all Asians. Others are referring to it as the “Asian Black Panther.” Those who are criticizing it for its representation have valid reasons, and I won’t dismiss them. But we simply can’t expect one movie to sum up the Asian experience. It’s vast. We have so many stories that need to be told. And to those saying it’s our Black Panther — no, it’s not. To say that is to say each culture will have its own Black Panther — that one movie we can claim. We should all have multiple movies that we can celebrate. If white people can have a plethora of movies, why can’t the rest of us? Crazy Rich Asians is a step in the right direction, and with its success, I can only hope that Hollywood will wake the fuck up and stop whitewashing our roles and letting us be the ones who tell our own stories… which brings me to my outfit…

As usual, I came dressed in theme! Wearing my Asian AF white savior t-shirt was a no-brainer. It bares the names of white actors who have taken on roles of characters who are either of Asian descent or just a straight up white savior: Scarlett Johanson for Ghost in the Shell, Emma Stone for Aloha, Tilda Swinton for Doctor Strange, and Matt Damon in The Great Wall. I wanted my outfit to be somewhat decadent, so I paired it with my Kate Spade statement necklace, yellow floral skirt, and a Gucci bag that I inherited. It is by far the boughiest thing I own. So you bet your ass I stuffed a bag of Shrimp Chips and Hello Panda inside of it.

Unbeknowst to me, a Mandarin cover of Coldplay’s “Yellow” plays during a pivotal scene in the movie. It almost didn’t make the movie, but I read a letter that director Jon M. Chu penned to Coldplay to get permission to use the song. Now knowing the intention behind it and how the song’s lyrics helped Chu reclaim the word yellow moved me even more when I watched it the second and third time. Wearing my yellow skirt was like a happy accident 🙂 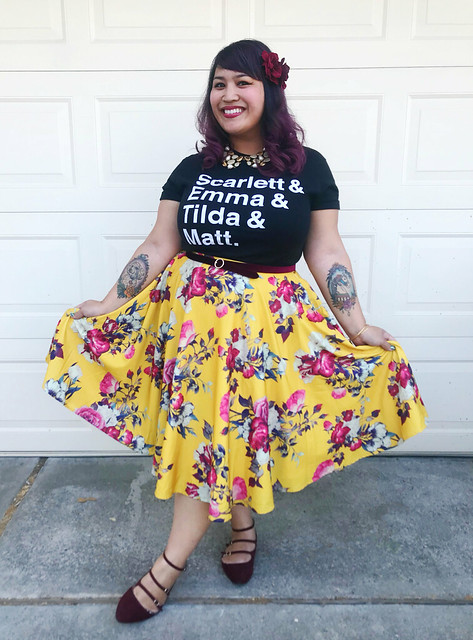 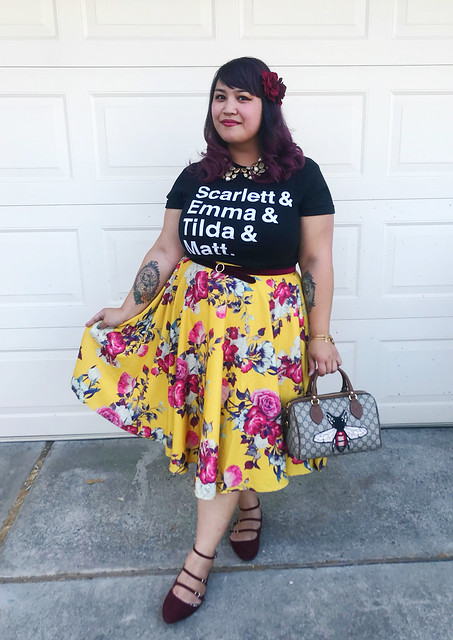 I feel like I could go on, and on, and on, and on about Crazy Rich Asians and how representation matters, and how awesome it is the see Asian men as hot love interests because they always get the short end of the stick, or the sweet justice I felt when I found out Crazy Rich Asians beat a Mark Walhberg movie senseless at the box office during opening weekend, buuuut I think I’ve written enough… for now 🙂 Have you seen Crazy Rich Asians yet? Were you just as emotional as I was when you watched it? How many times have YOU seen it?! Let’s talk about it in the comments!