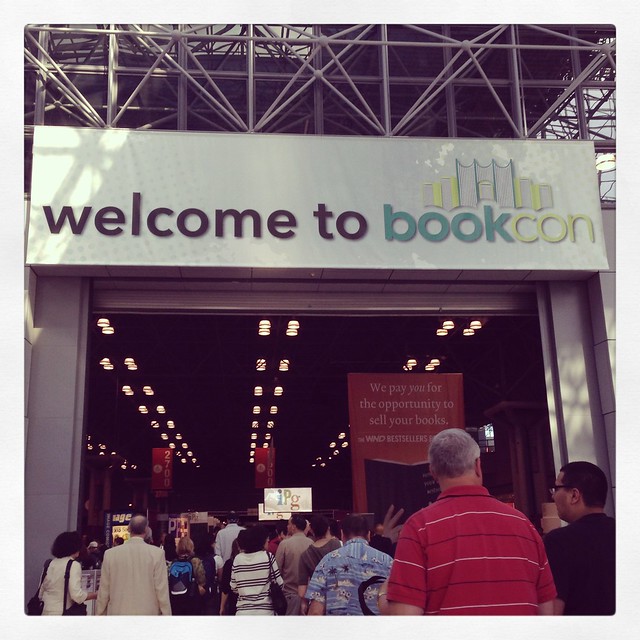 I got to go to BookCon last Sunday while I was in New York and it was BANANAS — B-A-N-A-N-A-S. I had to spell it out Gwen Stefani style because that’s just how bananas it was.

I didn’t know that it was the very first one, or that Book Expo America (BEA), a trade show for industry folks, would be going on at the same time. One side of the exhibit hall was cut off just for BookCon while the rest was devoted to BEA and it was constantly crowded as BEA attendees were also permitted access to the show floor at BookCon and the panels. It felt like all I did was wait in lines for a majority of the time — lines to get into panels, lines to get into the bathroom (which sounds normal, but 30 minutes?), lines to get freebies, etc. It was mass chaos — especially when it came time for the The Fault in Our Stars panel. My sister and I didn’t even bother trying to get into the queue, so no John Green for me. 😦

But with all that aside, I’m really happy that I was able to go! I just need to remind myself that it was their first go, so it wasn’t going to run perfectly smooth (no convention really does, in my experience). Hopefully they’ll take into account some of the snafus from this year to make the next one more successful. Plus I GOT SO MANY FREE BOOKS (pictured below)!!! 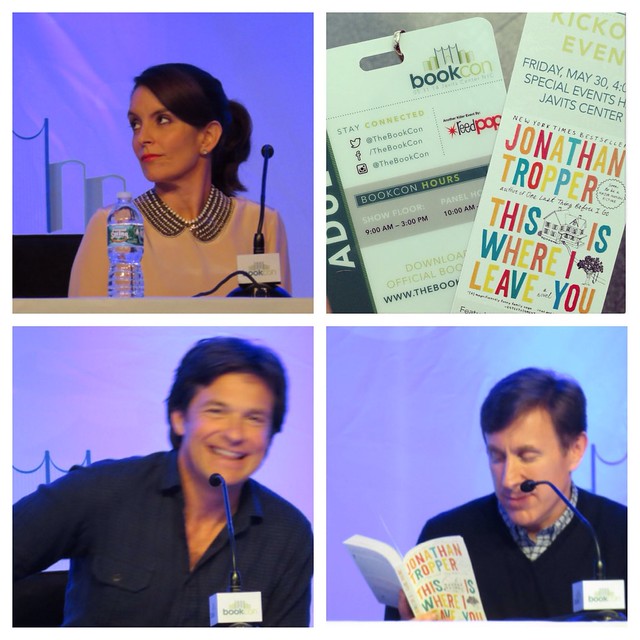 We went to the kickoff panel the night before where Tina Fey (AHH!!!), Jason Bateman, Shawn Levy, and Jonathan Tropper talked about and showed some special clips from the film adaptation of Tropper’s novel This is Where I Leave You. I read the book a couple weeks prior to the trip and I loved it. I’m all for stories about dysfunctional families (who isn’t?) and Tropper is a great storyteller, and based on the clips they showed it looks like it’s going to be a hilarious and gut wrenching adaptation. Oh, and I BREATHED THE SAME AIR AS TINA FEY (and Jason Bateman, but I’m mostly excited about TINA FEY). Just being in the same room as her was a f*cking honor! And Jonathan Tropper read a few passages from This is Where I Leave You to set up certain scenes they showed, which I thought was quite spectacular. He also wrote the screenplay, so it was definitely interesting to learn how he and the director decided to translate the book and figure out what parts to keep, what parts to tweak, and what parts to omit all together. 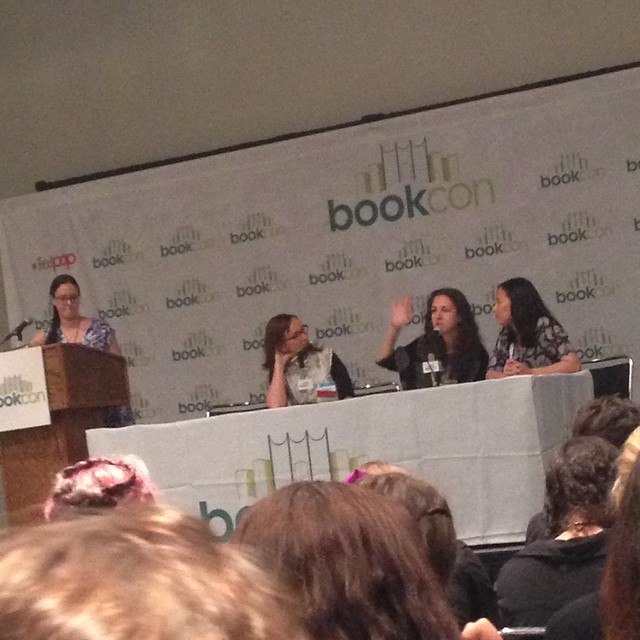 I also got to go to a panel that featured debut novelists Courtney Collins (The Untold), Yelena Akhtiorskaya (Panic in a Suitcase), and Celeste Ng (Everything I Never Told You) where they talked about their own individual journeys on how they got their first novels published — pretty informing stuff for aspiring writers. I also got a copy of their novels after the panel as well. I feel slightly bad though because the volunteer that was putting them on the table for us to collect them said, “One each.” I thought he meant one of each. But he didn’t. He meant literally only take ONE book. Oops. Courtney Collins’ book is in stores right now — I actually saw it at work yesterday. It’s such a trip to know I saw her and heard her talk about her book and a slew of other things! 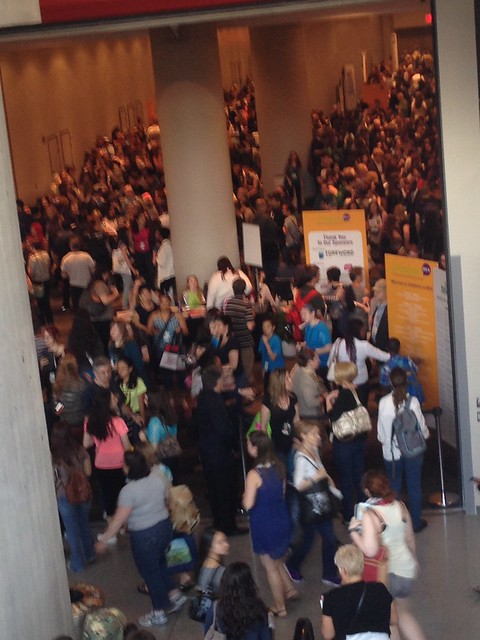 SO MANY PEOPLE IN THE HALLWAY FOR THE PANELS. O__O 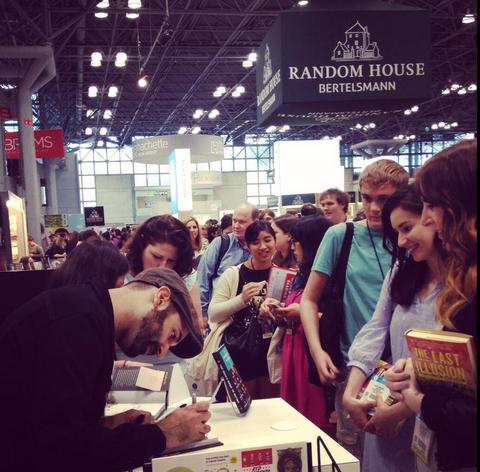 I got a free signed copy of Eric Smith’s The Geek’s Guide to Dating and I was pretty stoked to meet him since I started following him on Twitter after seeing an article about how he proposed to his fiance with a copy of John Green’s The Fault in Our Stars last year. If anyone is qualified to write a guide book on dating for geeks, it’s him, no question. I mean proposing by way of The Fault in Our Stars? SHUT UP, OKAY? OKAY. I high fived him for that too (I’m very enthusiastic about high fives). And he also sent me a copy of Ransom Riggs’ Hollow City to review last month, so I was happy to be able to thank him in person. Which reminds me, I really need to get crackin’ on that! By the way, I highjacked the picture above from his Twitter page since my sister and I are in it. I look unamused, but I promise I was happy. 😀 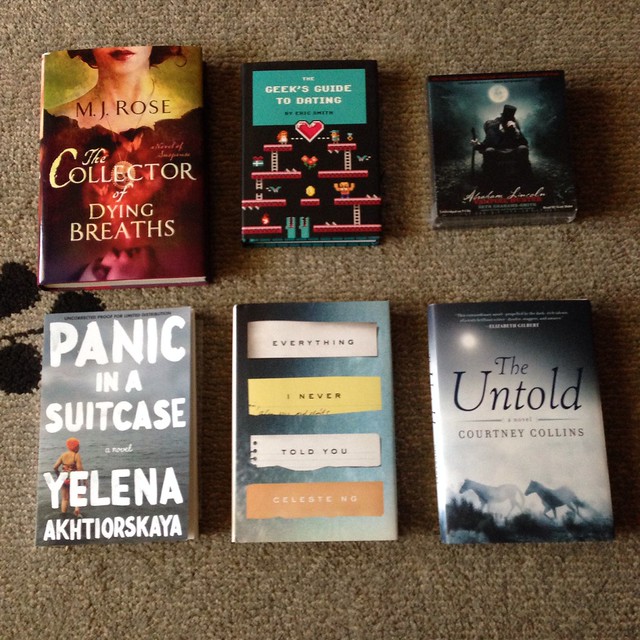 Like I mentioned earlier, I got quite a few free books! This isn’t everything, but they’re the main biggies that I managed to grab. I still can’t believe I got the Abraham Lincoln: Vampire Hunter audiobook for free. CRAYCRAY! I also got a couple tote bags and a tumbler that says “I Read YA” which I will proudly sip Arnold Palmers out of as I read YA novels this summer. 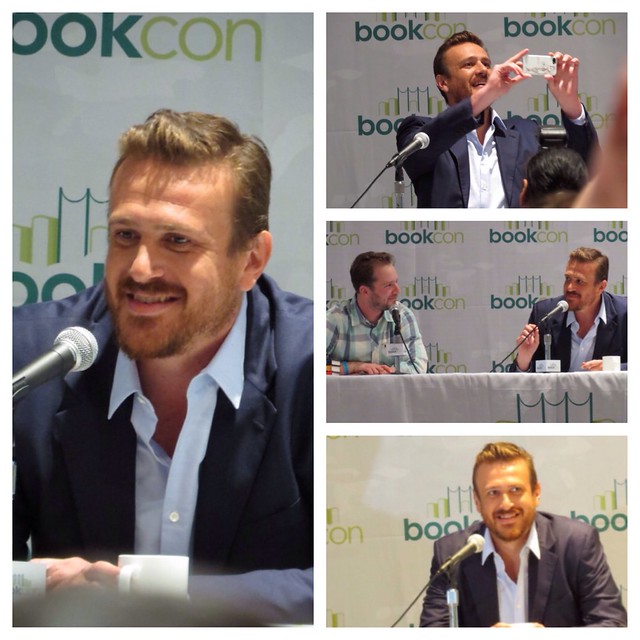 Since the line to wait to get into the The Fault in Our Stars panel was too crazy for me (like holy sh!t, so many teenyboppers — but I’m glad they’re all fangirling over something respectable like TFIOS instead of boybands like I did back in the late ’90s-‘oos), so we headed to Jason Segel’s panel where he talked about his upcoming children’s novel Nightmares which he co-wrote with Kirsten Miller. Luckily we got there before the line got too crowded! Listening to him talk, it’s clear that he’s a child at heart which just made me appreciate him more than ever. He talked about some of the crazy nightmares he had as a child — a witch that would eat his toes, and being chased by Dracula in his castle, and how one night he dreamt that he found a secret room in the castle that Dracula didn’t even know about and he just chilled there. And he said that he believes in magic and called Kermit the Frog the Tom Hanks of Muppets. 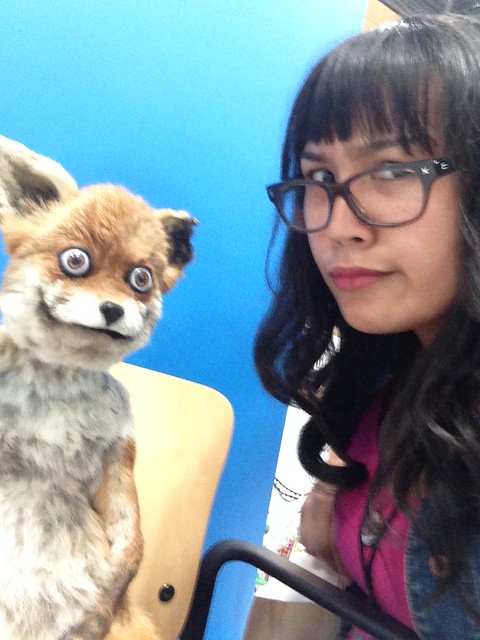 I didn’t get to take a picture with the infamous Grumpy Cat (that line was too hectic as well), so I had to suffice with this crazy ass taxidermy Fantastic Mr. Fox looking fellow.

Did any of you get to go to BookCon, or watch The Fault in Our Stars or are excited for Jason Segel’s book and the movie adaptation of This is Where I Leave You? 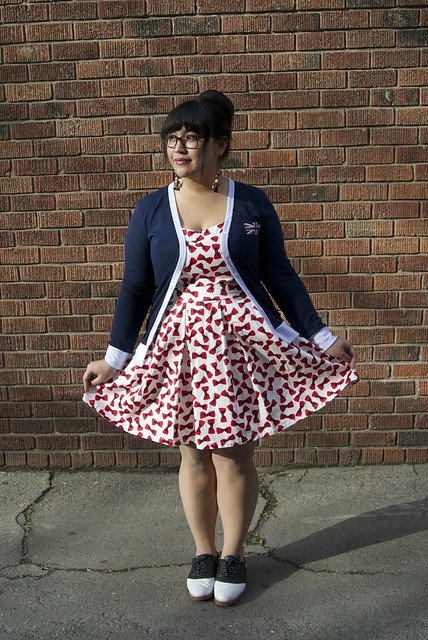 If you didn’t know, May 25 marks Geek Pride Day. Why this particular day? I’m not sure, I just remember reading about it on the interwebs last year. The More You Know cue shooting star! And since it’s Geek Pride Day, I thought it would be appropriate to show off my 11th Doctor inspired outfit! It’s one of my favorites that I’ve definitely worn more than once. Oh, and DOCTOR WHO IS COMING BACK IN AUGUST WITH PETER CAPALDI AS THE 12TH DOCTOR!!! I’m still upset with the horrific send-off Steven Moffat wrote for my beloved 11th Doctor. Like seriously, the 9th Doctor had a great send-off, and the 10th Doctor had a magnificently perfect send-off (so, so good I cried!), but the 11th Doctor? I didn’t even cry because I was too confused with what the hell was going on and the episode was such a snoozefest. Surely I can’t be alone on this, right fellow Whovians?

Oh, and also to celebrate this special occasion I’m throwing a sale on Le Fancy Geek Boutique! Save 15% with the code GEEKPRIDE14 (it expires on June 2). I still have some Doctor Who necklaces in stock too! 😀

Anywho (ha! see what I did there?), I’m heading off to New York tonight and I’ll be there for a whole week with my sister! I’ve been wanting to go to New York City ever since I watched Home Alone 2: Lost in New York, so childhood dreams are coming true, my ponies! There are so many things we want to do while we’re there, but two are set in stone — we’re watching Bullets Over Broadway starring Zach Braff (EEAAAGGGLLE!) and going to BookCon‘s kick-off panel for Jonathan Tropper’s This is Where I Leave You and Tina Fey and Jason Bateman will be there to talk about the movie adaptation they’re starring in. I WILL BE BREATHING THE SAME AIR AS TINA FEY. WHAT IS AIR? I DON’T KNOW ANYMORE. BUT I WILL TRY AND BREATHE IT. And then we’ll be going to BookCon the following day and John Mother-Fuggin Green is gonna be there. 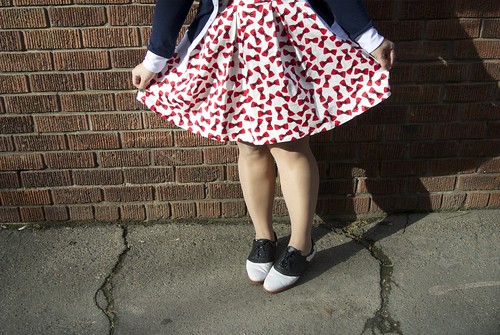 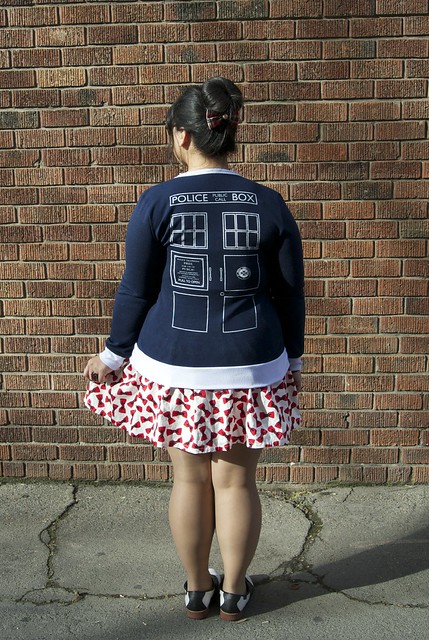 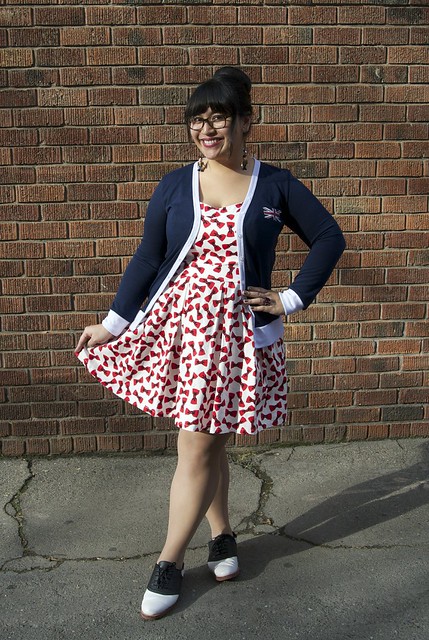