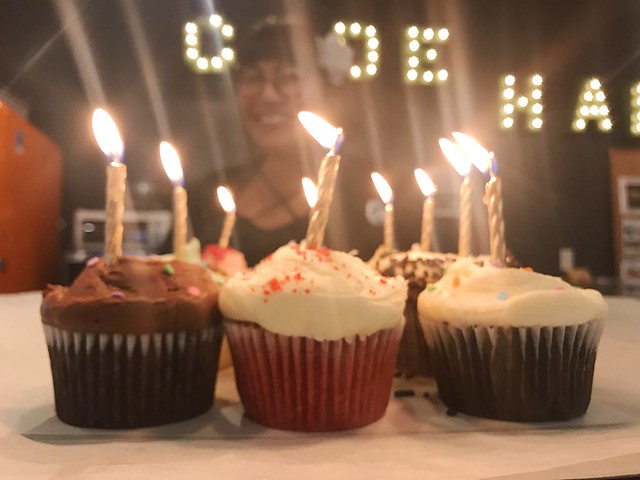 The first month of 2017 has come and gone, and to say it’s been a doozy would be a complete understatement. I celebrated my 31st birthday on the 12th last month, and though the day itself was okay — I went to work, tried to keep the fact that it was my birthday under the radar (despite the fact that I’m usually a complete attention whore when it comes to my birthday), but my boss found out anyway (thanks, Facebook) and surprised me with cupcakes, and I got a little too drunk during Happy Hour at work since my dinner plans were cancelled (oops) — but the next day I felt crippled with anxiety. It gnawed at my chest all day and continued throughout the weekend. I felt like a waste of space. I felt like everything I did wasn’t good enough. I felt so pathetic. And haven’t felt that way for quite some time.

I was staying at my cousin’s apartment in San Francisco (I work in the city 3 times a week), and her and her husband went away for the weekend, so I had the whole apartment to myself come Friday night. It felt nice to be alone and to have all of San Francisco at my disposal, but I’ve always been an anxious person. At 24, my doctor diagnosed me with anxiety disorder. So I’m always stressed, constantly worried, fearful of little things (like making a phone call), but somehow I’ve managed to keep it all at bay and feel relatively “normal.” It seemed like I was finally starting to get over the depressive funk I’ve been stuck in for the past 3 years. But I guess turning another year older and finding that I’m still not where I want to be in life creeped its way to the surface and ripped apart the protective layer of happiness I managed to create.

Sitting quietly on the couch of someone else’s home with nothing but my thoughts was a recipe for disaster. Ennui swept over as I sat in an apartment very much like the one I imagined myself living in when I was 21. My dream was to be a successful writer living in San Francisco with a tan French Bulldog named Jacque Cousteau, and that I was very well traveled, and was basically like Carrie Bradshaw minus the whole writing about my sex life for all to read bit. Hopefully in a happy long-term relationship, or happily single. That’s what I imagined. Then I dwelled on the reality of my actual situation — still living with my parents, still writing but not exactly the kind of stuff I thought I would, not as well traveled as I’d like to be, involuntarily celibate for the past 3 years… the good part though? I have a dog! But he wasn’t there with me. And then the loneliness sank in. As much as I love being an introvert and don’t like being around people, I like having them around sometimes. And even though I have no desire to be in a romantic relationship any time soon, I found myself longing for that kind of companionship. Then I downloaded Bumble (and have done absolutely nothing with it).

I found myself crying in the shower for no reason that weekend. I cried myself to sleep at night too.

I’m just frustrated all around. I’m frustrated with myself because I still can’t seem to move forward. I feel like I’m trying, but it’s not enough. I feel like I’m waist deep in quicksand, and for every inch I manage to claw my way to, I get sucked back in 5 more inches. I’m just stuck. I’m frustrated with the state of the country I live in because holy hell, what is even happening?! It’s like America has become a goddamn dystopia. The combination of that and where I’m at emotionally/mentally, well… it sucks. It just sucks. I’m so frustrated I can’t even think of a good way to phrase how sucky it all is!

Things could be worse. Believe me, I know. I get irritated when I find myself dwelling on things when I know there are people worse off than me. I have a job (2 actually), I have friends and family that love and support me, I have a roof over my head, I have a dog who lights up with joy when I come home. Even though I have all that, it doesn’t mean the negative feelings I have aren’t valid. It doesn’t mean I’m wrong for feeling the way that I feel. And if there’s one thing I learned about myself within the past 3 years, it’s this: I am strong. I am a fucking fighter. In all the times I cry, and curl up into a despondent ball of hopelessness, I’ve found that I always manage to pick myself right back up and keep going.

So here I go. Attempting to crawl out of the quicksand. Bring it, 2017.