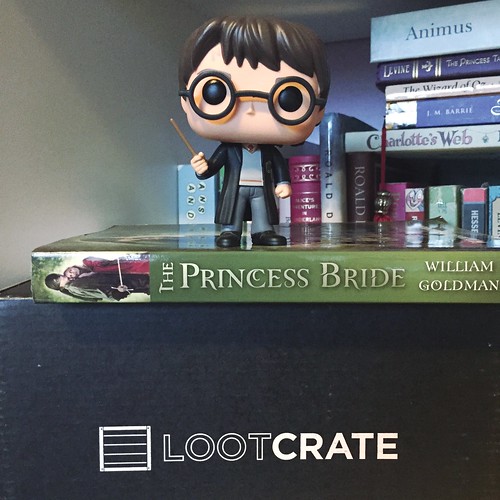 The O.G. geeky subscription box service Loot Crate wants to know what kind of awesome gizmos and gadgets a-plenty their fans would put in their very own Dream Crate. When I learned about the project and was asked if  I’d be interested in putting something together, I obviously said, “YAAASSS!” This is something I’ve given a lot of thought to before I was even asked to write about it, but since they’ve already done “Fantasy” and “Magical” (my ideal themes), I had to figure out a different theme that would encompass franchises I’m a fan of that have a fairytale, fantasy, epic journey, or magical-like quality to them.

So, I came up with “Story Time” and it would include items from The Neverending Story, The Princess Bride, Once Upon a Time, Harry Potter, and Game of Thrones.

With a theme like “Story Time,” it only makes sense to include an actual book! I think it’d be cool for it to include a copy of Cary Elwes’ book, and to make it extra special Loot Crate can design a different cover that’s exclusive to this particular crate. 🙂

I love the Hermione Funko Pop! that comes in the Hogwarts Express edition because she’s holding books, but I don’t the train itself. Sooo, I think Loot Crate should team up with Funko to make one similar to it that’s exclusive, but make it so that the book is more intricate with details like a title and artwork. And it should come with a little Crookshanks because how cute would that be?!

Once Upon a Time: Belle’s Chip tea cup

I have a love/hate relationship with Once Upon a Time. There have been many times where I watch an episode and I’m like, “WHY DO I STILL WATCH THIS???” I’ve been with it from the very beginning; I’m too invested in Regina finding happines,  dammit! Anyway, I love Belle’s Chip tea cup and I associate drinking tea with “story time,” so this seemed like the perfect item to include from the franchise. Even if someone who doesn’t like Once Upon a Time got this crate, I’m sure they’d love the cup anyway and find it very useful.

Book markers will obviously be needed if there’s going to be an actual book in the crate. They don’t necessarily have to be this exact Game of Thrones book mark set, but I’d prefer something like it.

This movie was my jaaaam when I was a kid! And I feel like The Neverending Story doesn’t get a whole lot of love with geeky subscription boxes, and that’s why I decided to include it in my dream crate. I call Rory “Baby Falkor” since him and the luck dragon look so much alike, so of course my dream crate’s Neverending Story item would be a Falkor t-shirt! It doesn’t necessarily have to be this one that I found on Redbubble by Mandrie, but I’d like the design to have really cute artwork. Also, the Loot Pets box that coincides with this should definitely come with a matching t-shirt!

What do you think, my little ponies? Would you be stoked if you opened up a Loot Crate box and unearthed all these goodies? Tell me what your perfect Loot Crate box would include in the comments section!