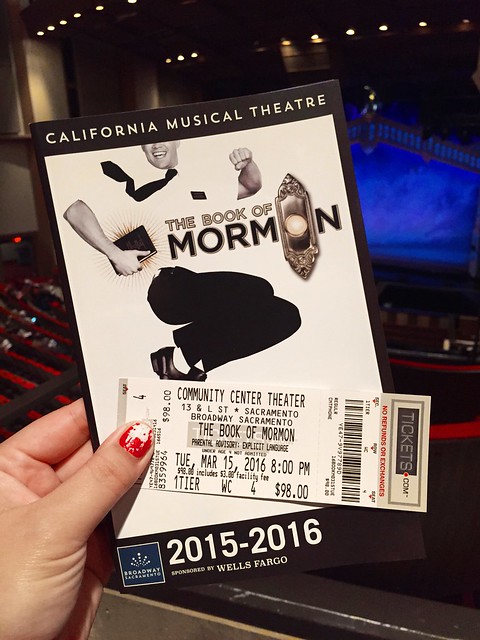 Last Tuesday my mom and I FINALLY watched The Book of Mormon. This is a musical we’ve been wanting to watch for years, and we’d always say we should watch it when it comes to San Francisco or Sacramento… except it’d always and come and go before we had a chance to buy tickets. This time around it came to Sacramento again and my mom managed to snag the last two tickets of its run! In case you’re not familiar with The Book of Mormon, it was written by Trey Parker and Matt Stone, the dudes who created South Park, and Robert Lopez, the man who is 50% responsible for “Let It Go.” Sooo, you can only imagine how extremely crass the humor of the show was. There were moments where my mouth was left agape because I was like, “What the f*ck am I watching??? Did they just say that?!” Just listen to “Hasa Diga Eebowai” (with headphones on). But I totally loved the show! I was only familiar with “I Believe” since I remembered seeing Andrew Rannell’s performance on the Tony’s about 5 years ago.

Its protagonist, Elder Price, is sent to Uganda for his 2 year mission. He’s absolutely gutted as he’d been a devout Mormon, and believed that his prayers of being sent to Orlando would be answered. On top of that, he’s been paired with Elder Cunningham, a dweeby guy with a penchant for fabricating the truth. Elder Price has a hard time adjusting to the harshness of his new surroundings as him and Elder Cunningham were mugged on arrival to the village by a warlord named General Butt-F*cking-Naked (I kid you not). Unable to reach the people with his faith, Elder Price has had enough and storms off saying he’s putting in a request for just him to transfer to Orlando, leaving Elder Cunningham behind. However, a girl named Nabulungi is entranced by the idea of the salvation Salt Lake City could possibly bring to her and her people, and seeks Elder Price. But, with him gone it’s up to Elder Cunningham, and his penchant for fabricating the truth ensues as he’s actually never read The Book of Mormon.

Okay, that’s all I’ll say about the plot. It’s incredibly hilarious though, but if you’re religious and quite sensitive and reserved, I would skip. And maybe stop reading because the pictures below might make you faint…

After the show was done, the actor that played Elder Price talked to the audience about Broadway Care/Equity Fights AIDS and what we as an audience could do to help support the cause. He also said if we didn’t donate, Jesus would think we’re a dick (inside joke from show). Actors from the show were out on the mezzanine with buckets for cash donations, and there were other goods you could get for a certain price. For $20 you could take a picture with Jesus and Satan! I mean, $20 seems like a lot for a picture, but the money was going to a good cause and I couldn’t pass up the opportunity! The actor who played Satan was so nice when it was my turn. He said he liked my flower and that the snake from his costume was probably going to be in it. I actually felt his costume snag my hair. And look at what a gentleman Jesus was; he left enough room between us for God. 🙂 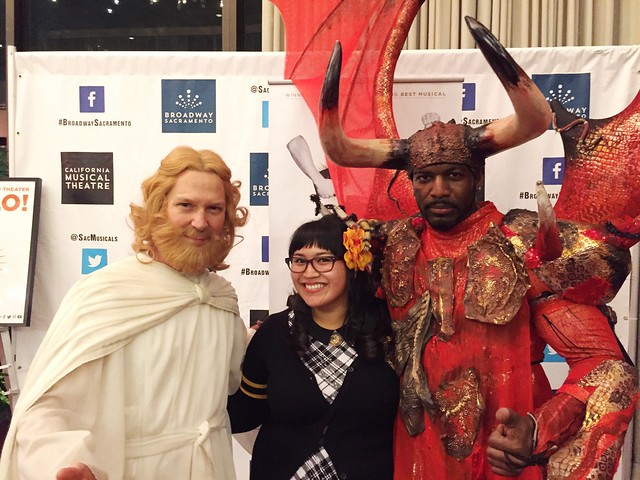 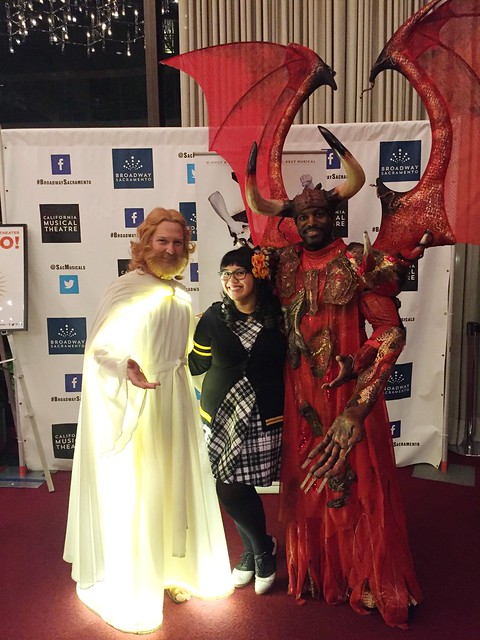 I’d definitely watch The Book of Mormon again should it ever return to a city near me! Have you seen it or any other musicals recently? Let’s talk about it in the comments section 😀

One thought on “The Book of Mormon”