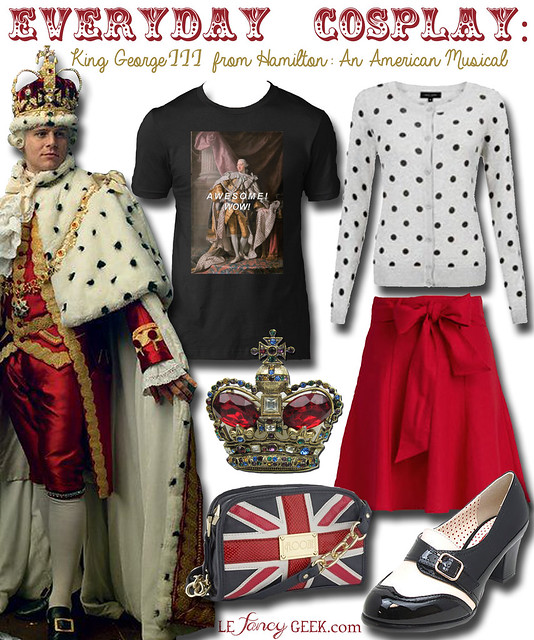 Last month I officially became Hamiltrash; I’ve been listening to the Hamilton soundtrack non-stop (ha, puns!) since I picked it up. I realize that I’m super late to the party, but daaaaammmn, do I understand what the hype with this musical is all about! And I’m totally kicking myself for not checking it out sooner. Hamilton is a work of sheer genius. Lin-Manuel Miranda, the creator and star of the musical, did such an outstanding job of blending hip-hop, r&b, and Beatles-esque music to tell the tale of Alexander Hamilton, a.k.a. the dude on the $10 bill, or as the musical refers to him “the ten dollar founding father.” The soundtrack both entertains and educates, and I love the fact that the cast is racially diverse; as Lin-Manuel Miranda puts it, it’s the story of America then told by America now. <– pretty sure I paraphrased it, but he said something along those lines.

Leave it to me to put together an outfit inspired by King George III, who’s portrayed by Jonathan Groff, though. Ha! His part in the show is quite small (probably around 9 minutes of stage time total), but “You’ll Be Back” is currently my jam! This is where the Beatles influence can be heard in the show, and it’s basically a kiss-off/break-up song that he sings to America. I adore how cheeky King George III is, and Groffsauce sings it with such flourish and gusto 😀

Who else thinks Hamilton is awesome (wow)? Let’s fangirl in the comments section!