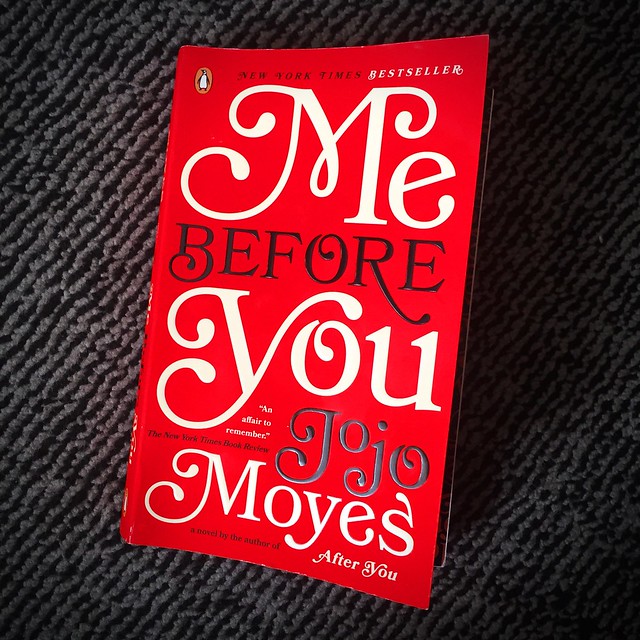 I remember picking up Me Before You by Jojo Moyes at Barnes & Noble sometime last year and thought the plot sounded interesting enough to make note of it and add to my goodreads “to-read” list. It took the trailer of the book’s film adaptation for my interest to pique again, but more on that later!

Me Before You is about a young woman named Louisa Clark who has a zest for zany apparel and doesn’t feel she quite fits in. She’s a waitress at her small hometown’s cafe, but suddenly finds herself in a rut as her boss decides to close shop out of the blue leaving her jobless. The pressure is on to find a new job ASAP as she’s the breadwinner in her family. After a string of unsuccessful gigs the Job Center has found for her, she lands a job as a daytime companion and caretaker for Will Traynor, a 35-year old quadriplegic man who had an extravagant lifestyle before the terrible accident that took his ability to walk away, and he’s pretty much fed up with life. Lou’s main job is to help keep things lively and socialize with Will, except it’s quite a challenge for Lou as his demeanor is ice cold, sarcastic, and condescending. Basically, Will’s a grade A arse. But as tales as old as time, they come to understand one another and bloppity bloop bloop. <— I’m not trying to give the whole story away. You can watch the trailer for that. 😛

I thoroughly enjoyed this novel and gobbled it up in two days! After watching the trailer I thought, “Damn, I think that story is going to break my heart. I MUST READ THE BOOK IMMEDIATELY” because I fucking love sad stories. I live for them. Sometimes I just want to have a good cry. I don’t know why, I just do. About a week after I saw the trailer, I went to the local used book store and scored a copy for $2.25!

Me Before You felt like a combination of Beauty & the Beast and The Fault in Our Stars because Lou’s got that small town oddball thing going on and Will comes from a rich family and his attitude is so nasty in the beginning. There’s even one part where Lou finally tells him that he doesn’t need to always be such an arse, and it totally reminded me of the part in Beauty & the Beast where Belle is attending to the Beast’s wound after he rescues her from the wolves and they have that back and forth banter, and Belle eventually puts him in his place by saying “Well if you hadn’t frightened me I wouldn’t have runaway!” I downloaded the audiobook for Me Before You since I had a couple of free credits from Audible (which I thought I cancelled, but alas), and it’s a good thing I downloaded it too because my vision got blurry towards the end — couldn’t make out a damn word through my tears.

I came across the trailer for the movie a few weeks ago and I geeked the hell out over nearly every actor that was cast in the film version.

This was me while watching the trailer:

Aww, it’s Khaleesi looking like a straight up dork.
Oooh, sexy British dude from The Hunger Games.
OMG! Claraaaaa! [from Doctor Who]
TYWIN LANNISTER IS IN THIS MOVIE TOO?
AND MISTER BATES?! [Downton Abbey]

The fact that it was British made me even more excited, because accents! So, if you’re into books that break your heart and inspire you to live boldly, then Me Before You is for… well, you!

3 thoughts on “The Biblio Files: Me Before You by Jojo Moyes”