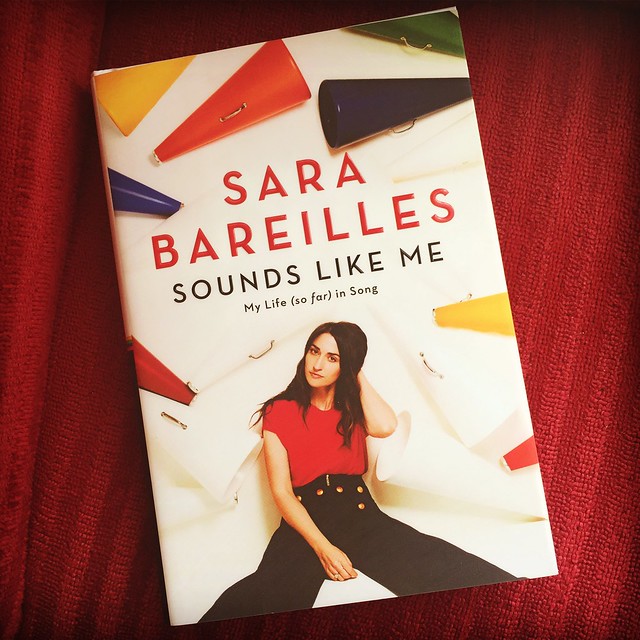 We all have celebrities that we wish could be our bffs. Don’t even lie! You know you do. Sara Bareilles is one of mine because she’s really goofy and is very fluent in speaking sailor like me (meaning we like to swear all the fucking time), so I think we’d get along fine. Plus she listed Miss Saigon as a musical she liked listening to in her memoir Sounds Like Me: My Life (So Far) in Song, and that soundtrack was my jaaaam in 5th grade! I actually did a Dubsmash of one of the songs not too long ago either (watch me make a fool of myself here). Looking back on it, it really shouldn’t have been because it’s about a young prostitute who falls in love with a G.I. during the Vietnam War and Jonathan Price plays a pimp called The Engineer, and in the opening number it’s basically about how all the men are thirsty as fuck and how there’s a bevy sexy Vietnamese hookers they can get with. But I digress.

I was so excited to hear that Sara Bareilles was coming out with a memoir because I love her music SO MUCH. It took awhile for it to come out, but it just came out last month! Sara is one of those artists who gives me crazy “Killing Me Softly” vibes because it basically feels like she’s telling my whole life with her words (haaa… see what I did there?). Her first album Little Voice came out a few months after me and my first boyfriend broke up, and it consoled me while I wallowed away in self pity. During that time, my appreciation for music grew ten-fold as I finally felt like I connected to certain songs on a whole new level. Sara’s music really spoke to me at that time, and it still does. She was there for me again with her second album Kaleidoscope Heart when I was frustrated with being an undergrad with no sense of direction, and how I was trying to get over some stupid guy I knew wasn’t right for me. “Let the Rain,” “Uncharted,” and “Gonna Get Over You” were on constant repeat. “Let the Rain” and “Uncharted” are still applicable to this chapter in my life.

If I were to create a soundtrack to my life, 50% of the songs would probably be hers… or 95% if I didn’t feel the need to include other artists for the sake of diversity.

Reading her book felt very much like having a long heart felt conversation with a good friend, like the kind where you sit and listen while the other party confides in you. She writes about how she was teased for being “chubby” in elementary school and how it took a toll on her self confidence. While reading it, it made me recall old emotional wounds that were bestowed from the bullying I endured during my formative years. Sara also talks about her issues with anxiety and times when she constantly worried and was filled with self doubt. Even in essay form, I felt overwhelmed with emotion by her words. As silly as it sounds, I felt more of connection to her because while her songs tell a story and emote a certain feeling, essays feel so much more vulnerable to me, and she put herself out there in the 8 essays that this book is made of. In the introduction, she explains how it took her over 2 years to complete this book because “It feels infinitely more vulnerable to speak about life without the metaphor and mask of music or my singing voice. I had to take a look at who I am without those things.” Each essay is titled after some of her songs, and they either tell a story about how the song came to be, or something that happened in her life that is related to it.

If you’re a fan of Sara’s music, I highly recommend that you read this book if you haven’t already. 🙂

3 thoughts on “The Biblio Files: Sounds Like Me: My Life (So Far) in Song”