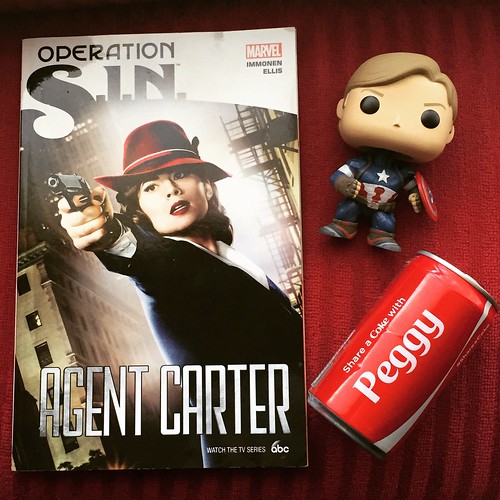 While I was in Hawaii, I thought I was going to have all this downtime to read. But I was wrong. SO WRONG. It wasn’t until my flight back home that I was able to read volume 3 of Ms. Marvel and Operation S.I.N.: Agent Carter. If you’re down with the badass ladies of Marvel, then you should definitely pick both of these graphic novels up! Operation S.I.N. won’t exactly fill that hole in your heart if you’re missing the Agent Carter tv show with queen Hayley Atwell playing the titular role like somethin’ fierce, but it helps a wee bit.

Operation S.I.N. follows Peggy Carter a few years after the war and she suddenly finds herself lured into a crazy mission led by Howard Stark after an alien energy source is discovered in Russia, and it’s up to the two of them to track down its location. I don’t want to give away too much of the plot, but there’s a dude that can turn into a bear and a Russian gulag run by Hydra. Hydra, aliens, gulags, and bears, OH MY!

The story takes place in the Marvel comic universe, rather than the cinematic one that most of us (-ahem– me) are used to, so I was slightly taken aback when Peggy says she’s American and not British. It’s an easy detail to get over once you immerse yourself in the story and see that Peggy’s razor sharp wit and overall badassery is still intact. 🙂

I’m trying my best to get into the swing of reading regularly like I used to, but I’ve been finding that I get extremely distracted and lost in my own head lately — specifically when I try to read books with no pictures. Bleh. That’s why I find myself reading graphic novels and comic books more frequently now. Anyhow, I’m hoping to regularly post more book reviews so please bear with me if they happen to sputter randomly.

What books have you been reading — graphic novel or not? Let me know in the comments!