Brace yourselves, COMIC-CON IS COMING.

In the past years I haven’t been a wise shopper. Just because something is “exclusive” doesn’t necessarily mean I must own it, right? I’m going to attempt to be a bit more strict on what I spend my precious monies on this time around, but there are some exclusives that have me doing the heart-eye emoji BIG TIME.

How fabulous is this sparkly Darth Vader coin purse?! I have a ton of coin purses at home, and I actually just took all my coins to the bank to cash them, buuut… I mean… this would be a practical purchase. <— it’s DARTH VADER. Of course I’m trying to justify my want for it!

OMG SO SHINY. I don’t think I need to explain why I want this. I mean… look at it!

This little unmasked version of Captain America is too cute for words! It would be perfect to put alongside the Peggy Carter figure that’s coming out later this year too. Since Barnes & Noble will have a few Funko SDCC Exclusives, I’m asking my friend Jennifer to go and take a look to see if they have this little Cap figure so I won’t have to stand in that crazy long-ass line during the convention. 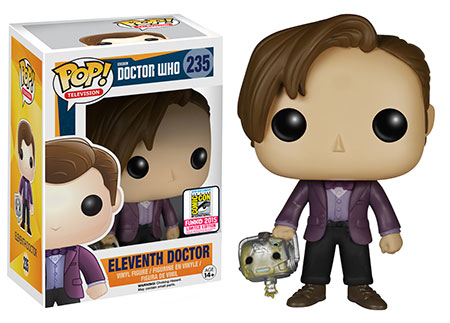 The 11th Doctor is my favorite Doctor and purple is my favorite color, so that’s a completely justifiable reason to want this adorable rendition of him, right?

Last year I was on a mad hunt for a Grey Wind plushie, except the only ones that were in the exhibit hall were all prototypes. UGH. This year Factory Entertainment has an exclusive set featuring little 6 inch versions of Grey Wind, Ghost, and Nymeria. AHH!! I just might cave, you guys. I just might. O__O

– pretty much EVERYTHING at the Her Universe booth

So none of these are officially exclusive, at least not that I know of, but HOLY. CRAP! Her Universe just released images of a few new items making their debut at SDCC and everything looks AMAZING!!! I’m particularly stoked for the Peter Pan collar Avengers top and Agent Carter t-shirt. I saw on Instagram that there won’t be any plus size Agent Carter tees available since they didn’t have enough shirts, but I’m hoping I’ll be able to squeeze into an XL. – crosses fingers –

What swag are you most looking forward to getting your hands on?