WARNING: This post isn’t my usual that’s laced with sparkles and sunshine . It’s pretty sad. It’s raw, it’s emotional, but I wanted to share it because I like letting my readers know I’m human and there’s more to me than clothes, Disneyland, and geeky things. 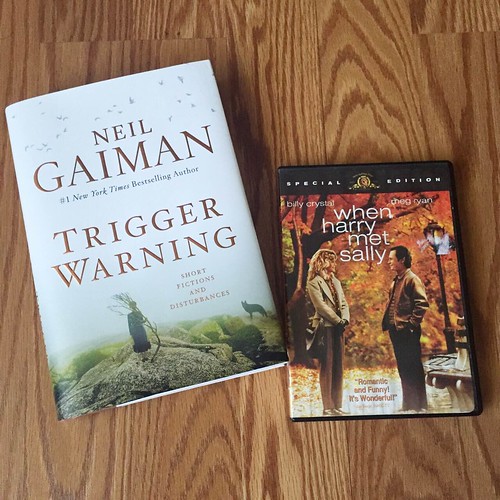 There are two things that happened yesterday.

When Harry Met Sally is a movie I had been avoiding like the plague. When my very first boyfriend broke up with me he kept saying, “Remember. When Harry Met Sally. That’ll be us.” He wanted us to be like the titular characters of a movie I had never seen, so I wasn’t sure how I felt about that. I was 21 when this happened. Seven years later, another boy would quote Harold & Maude as we broke up by telling me to “love some more” or something like that. Do all guys make movie references when they breakup with someone, or is it just me specifically?

To the next guy I date, I swear to the old gods and the new, if you quote a film or any other piece of pop culture while you break up with me (you’re an imbecile if you do such a thing by the way because I’m fantastic), I will jab you in the throat so hard that your Adam’s Apple will cease to exist. You have been warned.

I was somewhat familiar with the film, but I was hazy on the details of its premise. I told my late friend Jim about it and he said that my ex wanting us to be like Harry and Sally was complete bullshit, and incredibly horrible. He explained how the movie is about a guy and girl who are perfect for each other, but remain best friends and watch each other fall in and out of love with other people only to ultimately and predictably fall in love with each other in the end – 12 years after the fact (12 years, 3 months as they said in the movie). He said if you want to be with someone now, be with them now, obstacles be damned. Do not wait 12 years (and 3 months) to do so.

I didn’t care that When Harry Met Sally was hailed as a classic or one of the best romantic comedies of all time, or that I had friends who loved it and recommended it highly, or that it had Meg Ryan in it, who is always at her absolute best in romantic comedies (right?!). The film had been plagued by a stupid ginger that broke my heart and I wanted to have nothing to do with it.

Fast forward 8 years later, my friend Caitlin picked up a used copy of When Harry Met Sally during a random visit to Rasputin. She told, or rather re-introduced, me about how it’s such a beautiful film and what it’s about – a man and a woman who meet and hate each other at first, but ultimately become best friends and later on fall in love — and I still wasn’t intrigued. Not because of the asshole ginger who broke my heart 8 years prior, but because of a different asshole who ripped it out and crushed it to dust a year ago.

In the introduction of Gaiman’s Trigger Warning, he writes:

And what we learn about ourselves in those moments, where the trigger has been squeezed, is this: the past is not dead. There are things that wait for us, patiently, in the dark corridors of our lives. We think we have moved on, put them out of mind, left them to desiccate and shrivel and blow away; but we are wrong. They have been waiting there in the darkness, working out, practicing their most vicious blows, their sharp hard thoughtless punches into the gut, killing time until we came back that way.

The vehement feelings I have towards my former love haven’t been as intense as they were a year ago. In fact, they’ve been fading away with every passing day. There are finally moments in my day where he fails to cross my mind. I have no interest in hating him the way I did before, because to hate means that you still care, and I wish to not feel anything for him at all anymore. I don’t yearn for him, I don’t mourn over what we once had, I’ve accepted the fact that he and I will probably never be able to be friends again, and I certainly haven’t shed a tear over him in months.

Or at least I hadn’t until yesterday, after watching When Harry Met Sally.

After Caitlin first bought the DVD, she told me I probably shouldn’t watch it because it would make me sad. Especially since it was around the holidays, which was the time he and I had broken up. But as time soldiered on, I did too. I felt myself become emotionally stronger and regain comfort in my status of being single once more. I was feeling better about myself in general, so when the movie was brought up again in conversation recently I said I was ready to watch it. I was in a good place. What harm could this film do?

I was completely fine watching the parts with the adorable elderly couples telling the tales of how they had first met each other and how they’ve been married for some odd years since. I was completely fine even during parts of the movie where Harry and Sally were just off wandering around museums, having lunch, singing karaoke in public – things that my ex and I did when we were still just best friends and also when we dated… sans the karaoke part. But he was the only person I ever felt comfortable singing in front of. Again, I digress.

The part when Sally calls Harry after she finds out her ex boyfriend Joe was getting married to someone he hadn’t even been with for a very long time, that’s when I felt my chest cave in. I watched Harry rush over to her apartment and comfort her as she asks why didn’t Joe want her? Why didn’t he want to marry her when they were still together? She said multiple times throughout the movie that she was over him, but this new woman was supposed to be a transitional thing, not the one. And Harry embraced Sally, enveloped her in his arms good and tight like a best friend should. That’s where I lost it. Behemoth tears of acid flooded down my cheeks and left them burning. I felt my face contort into what we call an “ugly cry” as ugly sobs emitted past my lips.

I missed that. I missed what I was seeing on screen. I missed having my best friend, the one who’d go on adventures with me, and sing songs with me, and be my shoulder to cry on and reassure me that I’m a good person and that anyone who couldn’t see that was an idiot. I had that before, but it’s gone and I don’t think I will ever find that level of intimacy with another man (because trust issues).

My tears were sad and angry. They were sad because they made me miss my ex and not just the romantic love that we once had, but the strong bond we had as friends. And they were angry because Joe found love so fast, just like my ex. He started seeing someone barely a month after we broke up. Never have I ever felt like complete waste to someone. It’s like I didn’t even matter. I understood the reasons of why we were breaking up, but it still took time for it all to sink in and fully understand why. For him to start something new so soon after we broke up was not just a complete metaphorical slap to my face, but my entire being. The day after I learned that bit of information was when everything started to make sense, and when any love I had left for him quickly turned to hate.

The past is very much alive. Even when you stop thinking about it, it will always be there. I knew what I was getting into when I put When Harry Met Sally into the DVD player and hit play. I was aware of the plot, the reason I had to never wanting to watch it in the first place, and that the possibility of it making me sad was there. I had been warned. I had been warned multiple times. But I pulled the trigger (or the play button on the remote), and discovered what Neil said was true. The past is not dead. It’s always there, waiting.

PS: I’ll be back with a lighter post about Iron Man waffles, I promise.